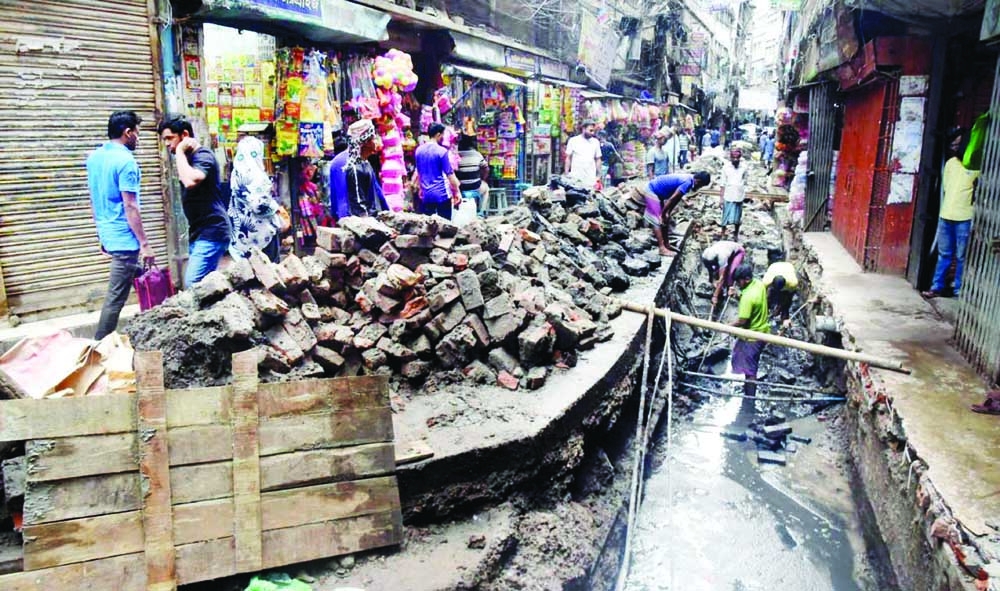 Pedestrians move through dilapidated road on the entrance of Moulvibazar in the capital on Tuesday due to construction of drainage system. As a result, the plight to wayfarers knew no bounds. NN photo

News Desk :
Dhaka South City Corporation(DSCC) is preparing a 30 year Integrated City Master Plan for Dhaka (2020-2050) aiming to turn it into a clean and smart city.
LGRD Minister Tazul Islam said this in Parliament on Tuesday replying to a tabled question from Awami League MP elected from Chattogram M Abdul Latif, reports UNB.
Tazul Islam also said that the Mohakhali Bus Terminal will be reconstructed after demolishing it under the "The Dhaka Public Transport Improvement Project."
The minister said the corridor road of BRT Line-3 will also be improved.
In response to another question from Abdul Latif, the LGRD minister said that projects will be taken to enhance the beauty of the Buriganga River old channel and create an aesthetic environment.
Responding to a question from Jatiya Party MP elected from Dhaka Syed Abu Hossain Babla, the minister said the daily water demand in both the city corporation areas in Dhaka is 260-265 crore liters.
On the other hand, the daily water production capacity of Dhaka WASA is 270-275 crore liters.
Therefore, the water production capacity of Dhaka WASA is more than the demand and there is no shortage of water supply as per the demand, the LGRD minister said.
In response to a query from ruling Awami League MP elected from Noakhali Morshed Alam, the minister said that after the handover of Dhaka WASA storm sewerage and canals to the City Corporation in December 2020, Dhaka North City Corporation (DNCC) undertook various crash programmes through joint efforts of Waste Management Department, Engineering Department and Estate Department.
As of December, 2021, about 71,584 tons of floating waste and about 10,000 tons of soil / sludge have been removed from 26 canals, Tazul Islam said.
All the canals of DNCC have been grabbed and the Estate department is trying to recover those grabbed canals with limited manpower, he added.