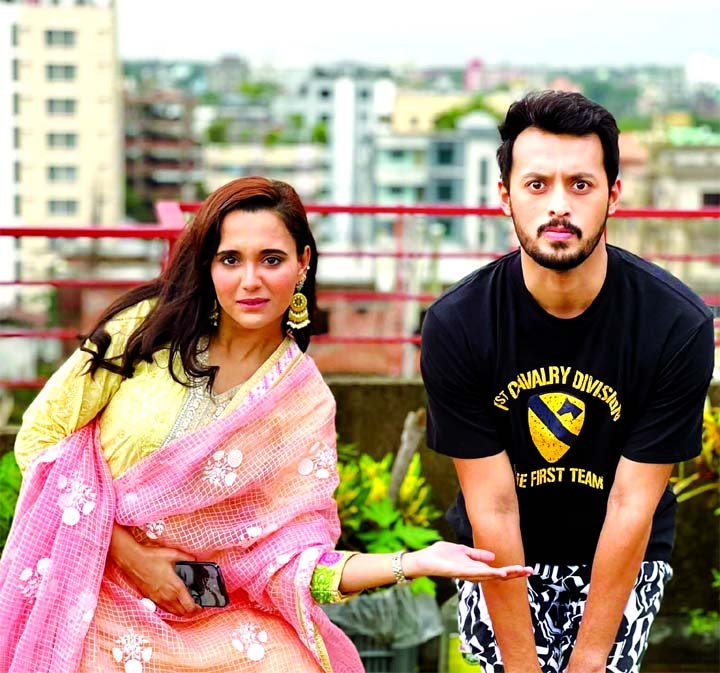 Sheikh Arif Bulbon :
Making drama in regional dialects is a great challenge not only for the directors but also for the playwrights. On the occasion of coming Eid, Mejbaur Rahman Sumon has written a special drama titled Chatgaiya Golmal, directed by Rubel Hasan. Shooting of the drama has already completed
in different locations in Chattogram district. Popular actors of present generation Sabila Nur and Irfan Sajjad played in two lead roles in this drama. While talking about acting in this special drama, actor Irfan Sajjad said, âI am a son from Chattogram. As a person of Chattogram, I always feel proud. But I really feel more proud as a Bangladeshi. By profession I am an actor. Playing with various characters is my game as an actor. I had earlier acted under Rubel Hasanâs direction. Making drama in dialect of Chattogram is really
a challenging matter for any director. But Rubel Hasan tried to give his level best effort to make a nice drama on the occasion of Eid to entertain the viewers. Sabila, I and others who acted in this drama they worked cordially to make this drama a successful project.
I hope after airing, viewers
will enjoy the drama.â
Irfan Sajjad also said that this drama will be aired on a YouTube channel during Eid-ul-Azha. Besides Irfan Sajjad and Sabila Nur, Tanveer, Nabila, among others, also acted
in different roles.
Meanwhile, Irfan Sajjad on Wednesday took part in shooting of a drama titled Mon Byapri, which story was written by Jamal Hossain. He acted opposite Sarika Sabah in this drama directed by Eamin Alan.
On the other hand, Sabila Nur has already finished shooting of Annonno Emon directed drama Nijossho Protibedon. Sabila acted opposite Manoj Pramanik in this drama. The actress also completed shooting of Mahmudur Rahman Heme's drama Ridika. According to Sabila, she will be seen in this drama in absolutely different look. She has already shared some pictures of her new look for this drama on Facebook, which has been appreciated
by the netizens.