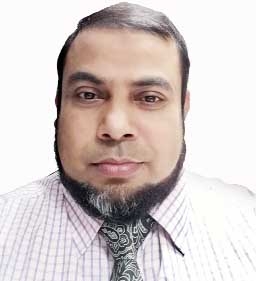 Md. Zillur Rahaman :
The flood situation in Sylhet and Sunamganj has reached alarming proportions due to torrential downpours and steep slopes. Twelve upazilas of Sylhet and Sunamganj have lost power due to power outage. Flights have been suspended at Sylhet Osmani International Airport due to water intrusion. Road communication is also cut off in many areas. Flood hit people are rushing to higher ground, schools or shelters in search of safe haven. There is crisis of pure water - in a word, flood hit people are spending their days in dire straits. The government has already deployed troops in Sylhet and Sunamganj to rescue flood victims but that is not sufficient considering the prevailing flood hit people.
Due to steep slopes and torrential downpours, the water level in the rivers of the Brahmaputra, Teesta, Kushiyara, Surma and other basins has crossed dire zones and the flood situation has also deteriorated in other districts of North Bengal. The number of people affected by the floods is in the millions and these people are now in a state of waterlogging. They are fleeing their homes in search of safe haven and food. Pure water is a big challenge to survive in these crucial moments. Many have taken refuge in small boats with their families. Their plight life is going on there half-starved. There has been a crisis of food and clean water. The government's relief needs are far from adequate.
The floods have damaged the homes, livelihoods and livelihoods of many poor families. Many roads, shops, dwellings, lands and crops have been wiped out. In this situation, it is easy to imagine the plight of the helpless flood affected people in the flood-hit areas. Various water borne diseases are spreading in different flood prone areas. They are not getting proper treatment due to lack of necessary medicines. Extreme levels of flood danger were announced in many parts of the country, with water pipes, deep tube wells and wells being severely damaged. Therefore, it is imperative to take immediate steps to provide relief, dry food, financial assistance and medical care to the flood hit people living in flood-prone areas.
Every able-bodied person should stand by the flood hit people in times of danger. Those who sympathize with the helpless, the downtrodden, the needy, the poor and the destitute and help those who are deprived of basic rights like food, clothing, medical care, homelessness, are truly human beings. It is also the moral duty of the rich people of the society to stand beside the helpless people and help them.
Civil society in the greater Sylhet region has demanded that Sylhet and Sunamganj be declared 'national disaster areas'. They say, "Government initiatives need to deliver relief goods quickly in Haor areas including Surma, Kushiyara, Manu rivers should be developed for disaster management. Suitable dams need to be constructed in the riverine areas. As we can see, the shelter project is very short. Adequate shelter projects need to be developed. Those who have lost their homes in the floods should be given government grants and their losses should be compensated. For this, the rich and well-to-do people of the country can freely help the families and relatives of the poor people affected by the floods."
So wherever you are, help the flood victims according to our ability. We can contact the local administration, development workers or volunteer teams for fundraising, assistance and distribution of funds for flood-affected people. So, without looking at the relief of the government, come forward to help the flood victims with the attitude of helping and cooperating as much as possible in the service of humanity! If everyone comes forward in unison, it will not be difficult to deal with natural disasters, no matter how big. Remember, the friend of danger is the real friend.

(Zillur Rahaman is a banker).