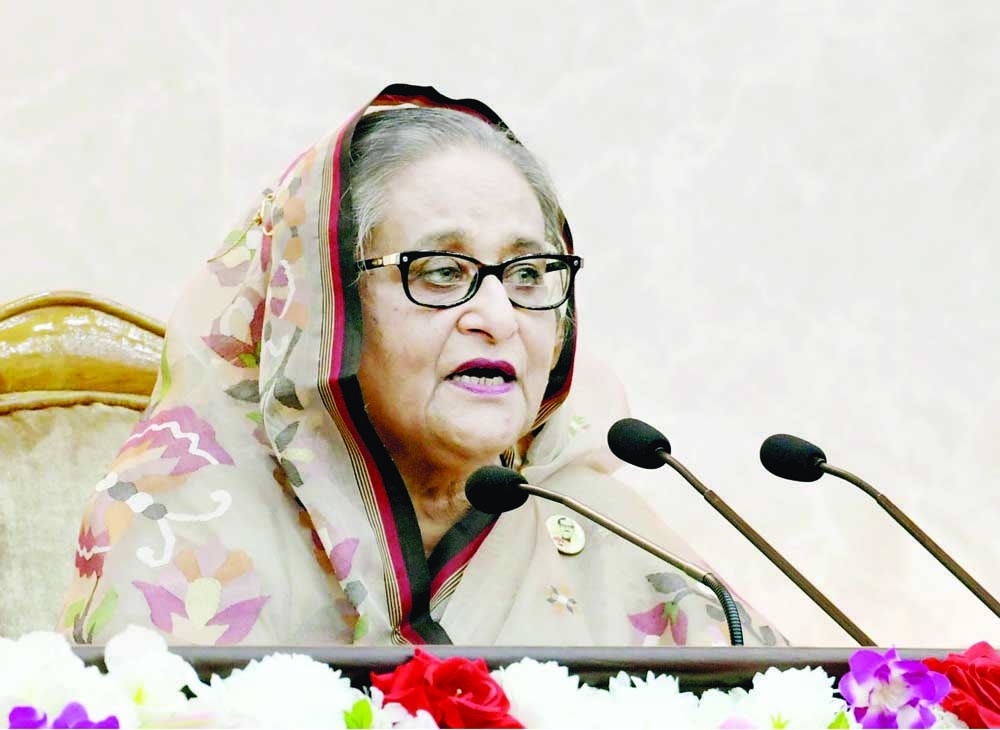 News Desk :
Prime Minister Sheikh Hasina on Wednesday said successful construction of the much-awaited Padma Bridge with own finance helped Bangladesh to come out of dependency on others to conduct the country's development programmes.
"Some people of our country have a perception or mentality that we can't do anything without money of others. We had the mentality of dependency and narrowness. But now, we came out of dependency to conduct development activities," she said.
The premier said this while replying to a volley of questions by newsmen in a press conference at her office here, reports BSS.
After withdrawal of funding from the Padma Bridge by the World Bank, she said, "We have decided to build the bridge by own financeÂ  and have been able to come out of the dependency on others."
The premier added: "We are a self-dignified nation. I am happy as we have proved that we can do it."
Mentioning that the Padma Bridge will be inaugurated on June 25 next, she said, "We have been able to construct the Padma Bridge with the courage of the masses."
She said no compromise was made in maintaining the standard of the Padma Bridge during its construction.
"Hope, none can raise any question about the standard of the Padma Bridge and there is no base of such question," she added.
The prime minister called upon all to celebrate the grand opening of the Padma Bridge with patience so no untoward incident can take place.
Sheikh Hasina, also president of the Awami League, said earlier she had just said that the World Bank cancelled the funding for the Padma Bridge following instigation of some Bangladeshi people and "this is the reality".
"I have no allegation against anyone. Rather I thanked (them) as the Padma Bridge was constructed with our own funding and courage as the incident (withdrawal of funding by the World Bank) happened," she said while replying to a question regarding bringing formal allegations against the World Bank.
The Prime Minister said everyone, particularly the economists, should bear in mind that Bangladesh takes a loan from the World Bank as its partner and the loan is paid with interest.
The World Bank is a development partner not a donor, she said, adding, "We don't take alms or mercy from any one, rather we take loans. It is true that the World Bank gives loans at lower interest and every country gets the same benefit.
The bank has no right to destroy the money sanctioned for any country, she said, adding that Bangladesh is now utilising the money sanctioned for the Padma Bridge in other development projects.
Replying to a question on possibility of lodging a case against the conspirators over cancelling the WB fund from the Padma Bridge, she said, "Time will say what to do."
About initiating investigation against Dr Yunus relating to giving 6 million dollars as donation to a foundation (Clinton Foundation), the Prime Minister said, "You journalists can do the investigation as you are doing such kinds of acts."
She added that if she started the probe then the journalists would say the investigation is being done out of vengeance.
"We have 54 private banks and they have the managing directors. How many MDs have the financial capacity to donate such a huge amount of money to a foundation? So, it will be better to get the matter investigated by the journalists," she said.Â Â Â Â  Â
The Prime Minister said she has more information about how much money the person (Dr Yunus) has in banks and how much money is being laundered by him.
She suggested the journalists to find out information regarding the matter and said that if necessary the government would provide further information.
The premier mentioned that Taka six crore has been shifted to a personal account of the person from a trust through a cheque from a trust.
She said she is also chairperson of a trust and she has no right to transfer any amount of money to her personal account from the trust.
Â "The matter is not so old. It is a matter of 2020," she added.
Â Replying to another question about construction of the second Padma Bridge at Dawlidia-Paturia point, the Prime Minister said her government would take action regarding the matter after seeing the return from the first Padma Bridge.
Â "We can't do it now as we have just done a huge task (Padma Bridge)," she said, reminding all that her government is taking projects into consideration.
Â The premier said they have built a huge number of bridges across the country since assuming office in 1996 to connect one part with another.
About giving stimulus packages to flourish agriculture based industry in the country's southern part after inauguration of the Padma Bridge, she said her government has been giving emphasis on establishing agro-processing industry on other part (Jajira-Shibchar portion) of the Padma River.
Mentioning that Bangladesh's economy is mainly based on agriculture, she said her government is doing everything possible to flourish the industry based on agriculture.
Stressing the need for setting up food processing industries, she said the processed food has a market both at home and abroad.
Senior Awami League Leader Amir Hossain Amu, Information and Broadcasting Minister Dr Hasan Mahmud, and PM's Principal Secretary Dr Ahmad Kaikaus were present on the dais.
PM's Press Secretary Ihsanul Karim moderated the function.