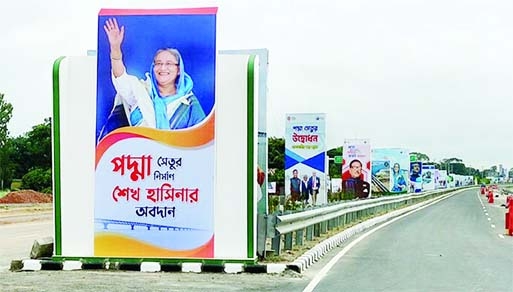 Banners and festoons have been put on the Mawa Road of Munshiganj ahead of the inaugural ceremony of Padma Bridge.

Anisur Rahman Khan :
The nation celebrates today a big moment by opening of the much-cherished Padma Bridge, the most splendid super-structure ever built in the history of Bangladesh. With the construction of the 6.15km-long bridge with its own funds, the country is announcing its ability, morale and glory in the world.
None but Prime Minister Sheikh Hasina showed the dream project to the nation and the nationâs dream project is finally going to be inaugurated today her after breaking all conspiracies of home and abroad.
Prime Minister Sheikh Hasina is scheduled to inaugurate the dream Padma Bridge at the Mawa end around 10:00am today (Saturday). Later, she will cross the bridge and attend a mammoth rally at Ilias Ahmed Chowdhury ferry ghat of Katthalbari in Madaripur district at 11:00am.
The nation for long looked forward to seeing the opening of the country's longest and the worldâs 11th largest bridge. The making of the bridge is also proclaiming the countryâs fast-growing economy.
Though the bridge is going to be
Â Â  Â
opened on Saturday, it will be available for public movement on Sunday morning. The bridge is a milestone for the country's connectivity and it will allow hundreds of thousands of people living in the 21 south-western districts to enjoy quicker travel to and from the capital Dhaka and beyond.
The government has spent nearly Tk80,000 crore so far on developing road and rail connectivity under the much-hyped project.
According to project officials, establishing a rail link through the lower deck of the bridge and river training work are likely to be completed in June next year.
ECNEC approved the Padma Bridge Rail Link Project in March 2016. The government approved the construction of a 169 km railway line from Dhaka to Jashore at a cost of Tk 349.89 billion. The project was to be implemented using a loan from China.
The toll rates for different types of vehicles have been announced, beginning from Tk100 for motorcycles and Tk750 for cars and jeeps.
People can pay tolls both through digital and manual systems. However, electronic toll collection (ETC) will not start this year, officials have said. As such, people can pay tolls manually for the time being.
On June 7, the government raised bus fares on 13 routes, adding the toll fixed for crossing the Padma Bridge to go to different south-western districts.
Through the construction of the Padma Bridge, the southern part of the country would no longer remain ignored.
The construction of the bridge started on November 26, 2014. The deadline for completion of the work under the contract was November 25, 2018. Later, though, the deadline was extended.
China Major Bridge Company under China Railway Group Limited was contracted for the construction of the main bridge and Sinohydro Corporation Limited of China for the link road, of which the contract value was Tk12,133.39 crore and Tk8,707.81 crore respectively.
The government had acquired 2,693.21 hectares of land for the bridge.
The Awami League government initiated the project in 1998. The pre-feasibility study of the project began in 1999 with government financing. Sheikh Hasina laid the foundation stone of the project on July 4, 2001.
In 2007, the then government approved the project at an estimated Tk10,161 crore.
In 2010, the Awami League government invited pre-qualification tenders while the World Bank signed an agreement of $1.2 billion to finance the project. But the lending agency withdrew itself from the project raising allegations of bribery conspiracy. The government refused all allegations and then Prime Minister Sheikh Hasina decided to build the bridge with the countryâs own resources to give a strong reply to the World Bank allegations.
In 2011, the ECNEC approved a revised cost of Tk20,507.20 crore for the project. In 2016, when the expenditure was increased again by Tk8,286 crore, the total cost stood at Tk28,793.39 crore.
In January of 2017, a Canadian court acquitted all accused of charges of corruption and termed the case baseless as it had been based on speculation, gossip and rumours. In September of the same year, the first span of the 41-span-bridge was installed.
In October 2017, more than one and a half years after the main construction work began, the first span was installed between pillars 37 and 38.
On November 27 in 2020, construction of all 42 pillars had been completed. The final 41st span of the bridge was installed on December 10 in 2020.
The last road slab was installed on the span that linked pillars 12 and 13 of the Padma Bridge on August 24 in 2021 making it the longest bridge in Bangladesh.
After confirming the date of inauguration on June 25 (today) the lamp posts were starting to get electricity as the entire Padma Bridge lamp posts have electricity.
Now the Padma Bridge stands as a line of light on the chest of the mighty Padma River and it is declaring the prosperity and magnificence of the nation.