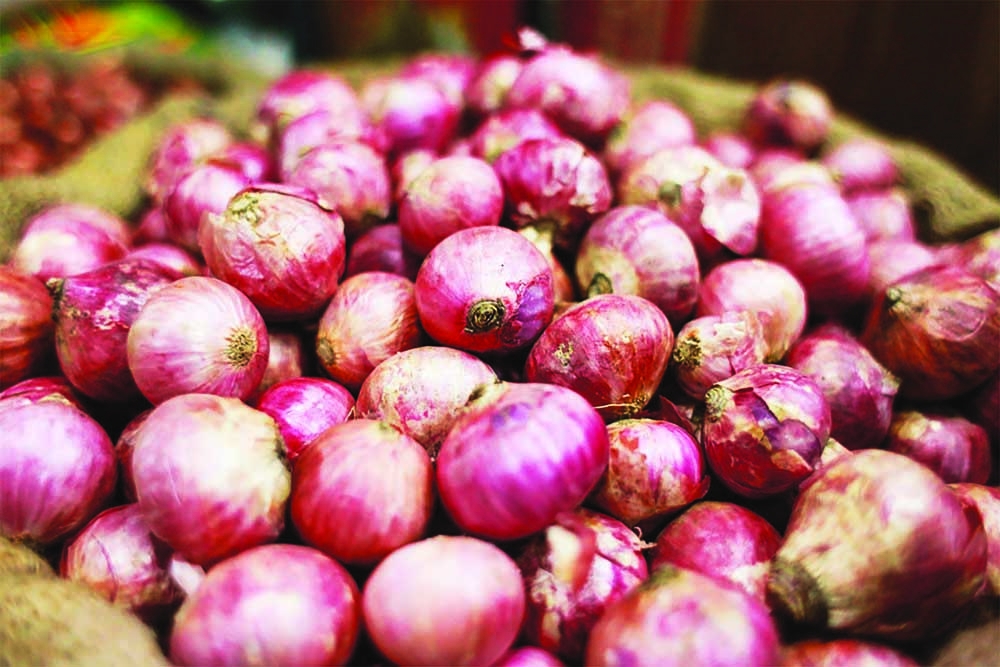 Staff ReporterÂ  :
The onion market has turned volatile ahead of Eid-ul-Azha, as traders have allegedly been increasing the commodity price as per their whim taking advantage of poor market monitoring. Â
The price of onion, a basic ingredient in most Bangladeshi food, marked a big rise in wholesale and retail markets in capital Dhaka just in a week, adding another layer of pain for the consumers who have already been bearing the brunt of recent rapid rise in the cost of everyday essentials.
In Dhaka, retail price of per kg local variety of onion was between Tk 50 and Tk 55 yesterday, up from Tk 30 to Tk 35 last week. That means price of the commodity has increased by Tk 15-Tk 20 per kg in a week.
According to the market data of Trading Corporation of Bangladesh (TCB), local variety of onion is being sold at Tk 45-Tk 50 per kg in the city markets yesterday while imported onion is being sold at Tk55-Tk 60 per kilogram.
Some traders, however, said the onion prices have gone up in the countryâs market due to supply crisis and ban imposed on Indian onion import.
But market insiders said although there is no supply crisis of onion in the market, unscrupulous traders are syndicating
to make extra profit by creating artificial crisis and raising prices.
According to the wholesale traders in the capitalâs Shyampur, the price of onion from Pabnais now being sold at Tk 48 per kg while the onion produced in Faridpur is being sold for Tk 42 per kg.
Pabna and Faridpur are two major onion producing districts in Bangladesh.
Traders, on the other hand, say increased transportation costs are having an impact on the market. The traders also demanded import opportunities to keep the market situation normal.
Onion import from India came to a halt after Eid-ul-Fitr as the government temporarily suspended imports of the item from the neighbouring country to ensure local farmers get fair price.
âThe price of every essential commodity has gone up. Edible oilprices have earlier hit record high and now prices of onions continue to surge, how one can manage a monthly budget when incomes are not rising?" Suraiya Tazreen, housewife, told The New Nation yesterday with a note of frustration. Â
She said, traders have increased prices of the commodity to earn some extra buck. She also blamed lax monitoring for the latest onion price hike.
In 2019, the country witnessed an unusual hike in the prices of onions. The prices of the key kitchen commodityrose to nearly Tk 300 a kg then.
Meanwhile, a team of the Directorate of National Consumer Rights Protection conducted a raid in the capitalâs Shyambazar wholesale market amid rising prices of onion.
At that time they found traders were selling onions at high rates though they have no receipt for any purchase price. Besides, traders stockpiled the commodity illegally.
The team imposed fine Tk 30,000 to three traders for these irregularities.
Bangladesh has a demand for 2.3-2.5 million tonnes. It also imports an estimated 0.9 to 1.1-million tonnes against its deficit.