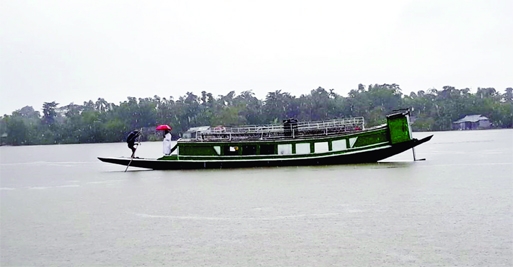 People move by boat from a flood-affected area to a safe place in Sunamganj on Thursday as flood situation in the district worsened following last two daysâ heavy rainfall.

Staff Reporter :
The flood situation in Sylhet and Sunamganj has deteriorated further due to the onrush of water from the upstream and rainfall in the last three days.
AKM Niloy Pasha, sub-divisional engineer of Sylhet Water Development Board, said: âIt is raining in Sylhet as well as upstream. As a result, the water of the Surma and the Kushiyara rivers are flowing above their danger levels at some points. The low-lying areas of Chhatak, Dowarabazar and Sunamganj Sadar upazilas inundated afresh in floodwaters as of Thursday morning, leaving local residents marooned again.â
Many roads in Sunamganj city are now underwater, increasing the suffering of the flood victims.
Army, navy and coast guard personnel, the local administration, and different organizations are still distributing relief materials to the flood-affected people of the district, reports our Sylhet correspondent.
A total of 185mm of rainfall was recorded in Sunamganj and 85mm at Kanaighat (Sylhet) in the past 24 hours till 8am Thursday alongside increased rainfall in the Indian states of Sikkim, Arunachal, Assam, Meghalaya and Tripura.
Besides, at least 3 million people became homeless in Sylhet alone in the ongoing flooding, officials said on Thursday, adding that 40,000 houses were also destroyed.
Moreover, The major rivers of northern Bangladesh are likely to rise rapidly in the next 48 hours for which low lying areas of Kurigram, Dinajpur, Gaibandha, Nilphamari, Bogra, Jamalpur, Sunamganj, Sylhet and SirajganjÂ  districts may go under flood waters.
River waters of Teesta, Upper Atrai, Dharla, Dudhkumar, Upper Karotoa, Tangon, Punarbhaba and Kulikh are rising rapidly due to heavy rains in the upstream, according to sources of Bangladesh Water Development Board (BWDB).
Meanwhile, Flood waters of nine rivers in seven flood-hit districts have been flowing above the danger level, sources in the Flood Forecasting and Warning Centre (FFWC) said.
All the river water in Sylhet and
Â Sunamganj have increased by 22cm due to heavy rains in the upstream.
Surma water is flowing 99 cm above the danger level in Chhatak, while Old Surma flowing 22 cm above the danger level in Dirai.
Executive Engineer of BWDB of Sunamganj district Jahurul Islam said that heavy rains occurred in the upstreamâs Meghalaya, as a result river water may increase.
River erosion by Teesta river has turned into a severe level in Kaunia upazilaâs Tepamadhupur Union Parishad under Rangpur district.
âAt least 20 houses including 25 acres of lands of Harincharan Swarma, Char Gonai and Biswanath villages have been washed away due to severe river erosion by the Teesta,â Chairman of Tepamadhupur Union Parishad Rashedul Islam told to this correspondent.
According to BWDB Surveyor Mahbub Alam of Dinajpur, water of three riversâAtrai, Choto Jamuna and Punarbhaba are rising rapidly.
There are many houses and other structures under threat to river erosion in Talpukur and Baniapara areas.
âTeesta river water is flowing 52.37cm above the danger level at Teesta Barrage point,â Ashraf-u-Doula, BWDB Executive Engineer of Dalia told to this correspondent.
Water of Punarbhaba river is flowing 32.06 cm above the danger level, while Atrai 40.19cm and Choto Jamuna 26.36 cm are above the danger level, Mahbub said.
At least 20 families of the areas have been marooned already due to fresh flood water.
All the major rivers in the country are in rising trend except the Surma-Kushiyara, which may continue in next 48 hours, the FFWC bulletin said.
Arifuzzaman Bhuiyan, Executive Engineer of BWDB said, âthere is chance of heavy rainfall at places of the northern and north-eastern Bangladesh along with Assam, Meghalaya and Sub-Himalayan West-Bengal (Jalpaiguri, Sikkim) of India. As a result, basically the major rivers of northern Bangladesh (Teesta, Upper Atrai, Dharla, Dudhkumar, Upper Karotoa, Tangon, Punarbhaba and Kulikh) may rise rapidly at times during this period.â
The water level of Teesta river at Dalia Point, Dharla river at Kurigarm point and Dudhkumar river at Pateswari point may remain close to danger level in the next 24 hours, he added.
Bhuiyan said, âflood situation in Kurigram and Dinajpur districts in northern Bangladesh and Sylhet, Sunamganj, Netrokona, Kishoreganj and Brahmmanbaria districts in north-eastern Bangladesh may remain steady in the next 24 hours.â
Water of the nine rivers Dudhkumar, Dharla, Brahmaputra, Upper Atrai, Surma, Kushiyara, OLd Surma, Baulai and Someswari were flowing above the danger level, he added.
Besides, the Directorate General of Health Services (DGHS) said that the total fatalities in the ongoing flood reached 92 on Thursday.
Among the deceased, 66 people have died by drowning in floodwater, 14 from lightning strikes, two from snake biting, one from diarrhoea, and nine due to other reasons since mid-May.