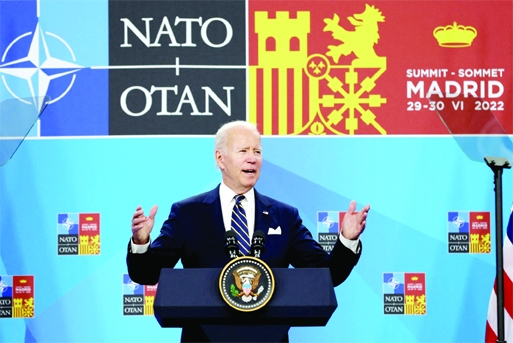 News Desk :
The United States and its allies will support Ukraine "as long as it takes" to ensure the country is not defeated by Russia, President Joe Biden said Thursday, adding that the U.S. intends to announce $800 million aid for Ukraine, including new advanced air defense system, in next few days.
"We are going to stick with Ukraine, and all of the alliance are going to stick with Ukraine, as long as it takes to make sure they are not defeated by Russia," said Biden, speaking to reporters at a summit closing news conference, reports agencies.
"Ukraine has already dealt a severe blow to Russia," Biden said, adding that he did not "know how it's going to end, but it will not end with a Russian defeat of Ukraine."
U.S. President Joe Biden on Thursday said Washington will announce $800 million of additional weapons aid to Ukraine in the coming days.
"We are going to support Ukraine as long as it takes," Biden said at a press conference on the sidelines of the NATO summit in Madrid.
Biden's comments came at a press conference in Madrid at the conclusion of the annual meeting of NATO leaders and after he attended a summit with the Group of Seven advanced democratic economies in the Bavarian Alps.
Closing the military alliance's summit, Biden also said that transatlantic alliance has transformed itself by adapting to a rapidly changing security situation around the globe. "I think we can all agree that this has been a historic NATO Summit," he said.
The three-day summit included the Biden administration announcing plans to permanently bolster the U.S. military presence in Europe, an agreement between Turkey, Finland and Sweden to pave the way for the accession of Nordic nations into NATO, and the alliance updating its strategic concept reflect that China's "coercive policies" are a challenge the Western bloc's interests.
Biden noted the last time NATO updated its strategic concept 12 years ago, Russia was characterized as a partner, and the document did not even mention China. The new document hammered out at the summit changes that.
"The world has changed, changed a great deal since then," Biden said. "This summit was about strengthening our alliances, meeting the challenges of our world as it is a day, and the threats we're going to face in the future."
Biden said "Russia, Russia, Russia" is the reason people are spending more at the pump. He's talking with U.S. allies about setting a cap on the price of Russian oil, limiting how much money that Moscow can make from its exports.
Although gas prices remain a political challenge for Biden, he said that he wouldn't use his scheduled trip to Saudi Arabia next month to request more oil production.
Biden also said Friday's Supreme Court's decision ending a constitutional right to abortion is "destabilizing" but said it does not affect the U.S.' standing on the world stage.
"America is better positioned to lead the world than we ever have been," Biden said. "But one thing that has been destabilizing is the outrageous behavior of the Supreme Court of United States in overruling not only Roe vs. Wade but essentially challenging the right to privacy."
"I could understand why the American people are frustrated because of what the Supreme Court did," he added.