Long tailbacks on toll plaza as all booths were not operational 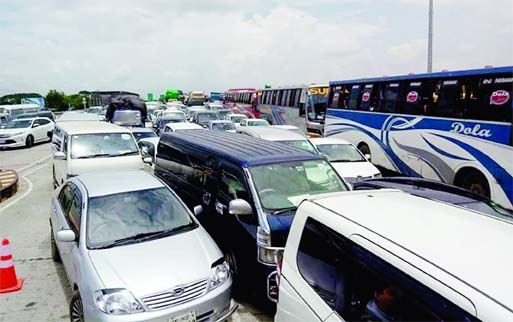 Vehicles get clogged at the Dhaka-Bhanga Expressway on Friday, as all the toll collection booths on the Expressway were not operational.

Staff Reporter :
The first day of the toll collection on the 55-km long Dhaka-Bhanga Expressway experienced huge traffic jam with hours of waiting because all the toll collection booths were not operational.
Sources said though there were 10 toll collection booths in Bhanga of Faridpur only four booths were operational, which caused a huge tailbacks and sufferings of the people who travelled by the expressway.
However, when the three more booths were operational at around 11am, the traffic congestion began to reduce.
"There was huge traffic jam early in the morning. But the pressure on the toll plaza began to be reduced with the opening of three new booths," Abu Hossain Zakaria, in-charge (administration) of the toll plaza said.
The toll collection
on the Dhaka-Mawa-Bhanga Expressway started at 12 o'clock on Thursday night as par the previous announcement of the Road Transport and Bridges Ministry. Â
The Korea Expressway Corporation has been appointed for toll collection on the Dhaka-Mawa Expressway for five years. As part of the deal, the government will pay Tk 717.4 crore to the company.
Though the toll collection began at midnight, the pressure of traffic on the expressway become immense from 6am when only four booths worked.
During this time, a four-kilometre long tailback was found on the expressway for Bhanga-bound vehicles from Dhaka in Bogail toll plaza area.
On the other hand, more than one kilometre long tailback was experienced by Dhaka-bound vehicles from Bhanga.
A Dhaka-bound bus driver waiting at Bogail toll plaza, Jakir Hossain, said, "When the Padma Bridge is opened, I reached Dhaka very soon. But with the starting of toll collection, I am stuck in traffic jam for more than one hour."
Authorities said now they are collecting tolls from seven booths as the remaining three booths are under-construction on the Bhanga side.
The government has named the 55-km long expressway as Bangabandhu Sheikh Mujibur Rahman Highway. This expressway also includes 6.15-kilometre-long Padma Multipurpose Bridge which was inaugurated on June 25.
After crossing the Padma Bridge, a big bus will have to pay Tk 200 for using the 23km of the expressway from Jajira to Bhanga while a minibus will pay Tk 110, microbus Tk 90, private car Tk 55 and motorbike Tk 10 for toll.
On the other hand, a trailer truck will pay Tk 675, heavy truck Tk 440 and medium truck Tk 220.