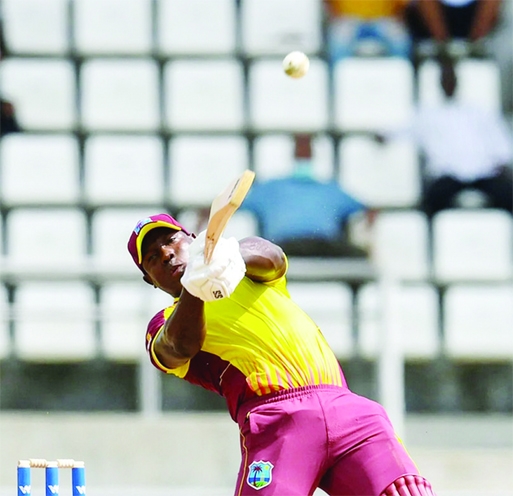 Sports Reporter :
Bangladesh lost to West Indies by 35 runs in the second Twenty20 International (T20I) at Windsor Park in Dominica on Sunday.
Chasing West Indies massive total of 193 for the loss of five wickets in the stipulated 20 overs, Bangladesh were restricted to 158 for the loss of six wickets in 20 overs.
Bangladesh made a painful start as opener Litton Das (5) caught at the deep backward square leg by Shamarh Brooks off Obed McCoy when Bangladesh's score was just eight.
Anamul Haque, the other opener (3) was bowled out by McCoy when the tourists' total was eight for the loss of two wickets.
Second down Mahmudullah Riyad (11) was caught at the mid-off by McCoy off Odean Smith when the visitors' score was 23 for the loss of three wickets.
Then, Shakib Al Hasan and Afif Hossain repaired the damage contributing together 55 runs for the fourth wicket partnership before Afif Hossain was caught behind by wicketkeeper Nicholas Pooran off Romario Shepherd when Bangladesh's total was 78 for the loss of four wickets.
Shakib Al Hasan remained unbeaten with 68 runs. He hit three sixes and five fours in his 52-ball innings. It was Shakib's 10th half-century in T20I cricket. Shakib also crossed the 2000-run land mark in this shorter version cricket competition. He captured 100 wickets in T20I format. Shakib is the only cricketer in the world who scored 2000 runs and bagged 100 wickets in T20I cricket.
Afif made 34 from 27 balls featuring three fours and a sixer.
Fourth-down Nurul Hasan (7) was caught at the deep square leg by Brandon King off Akeal Hosein when the touring side's score was 97 for the loss of five wickets.
After Nurul Hasan's dismissal, Shakib and Mosaddek Hossain fought back scoring together 53 runs in the sixth wicket stand before Mosaddek (15) was caught behind by Pooran off Shepherd when Bangladesh's total was 150 for the loss of six wickets.
Mahedi Hasan remained unbeaten with five runs.
Shepherd and McCoy was the most successful bowlers of their side claiming two wickets each in the space of 28 and 37 runs respectively.
Earlier, West Indies lost their early two wickets for 26 runs.
Then, opener Brendon King and Nicholas Pooran mended their innings adding together 74 runs in the third wicket stand before Pooran (34)Â  was trapped leg before wicket by Mosaddek when the islanders' total was 100 for the loss of three wickets.
Later, King and Rovman Powell put on together 63 runs in the fourth wicket partnership before King was caught at the long-off by Shakib Al Hasan off Shoriful Islam when the hosts' total was 163 for the loss of four wickets.
Powell remained unbeaten with 61 runs. His windy 28-ball innings was belted with six sixes and two fours. Powell was adjudged the Man of the Match.
King hit 57 from 43 balls featuring seven fours and a sixer.
Shoriful bagged two wickets at the cost of 40 runs, while Mosaddek and Mahedi Hasan took one wicket apiece.