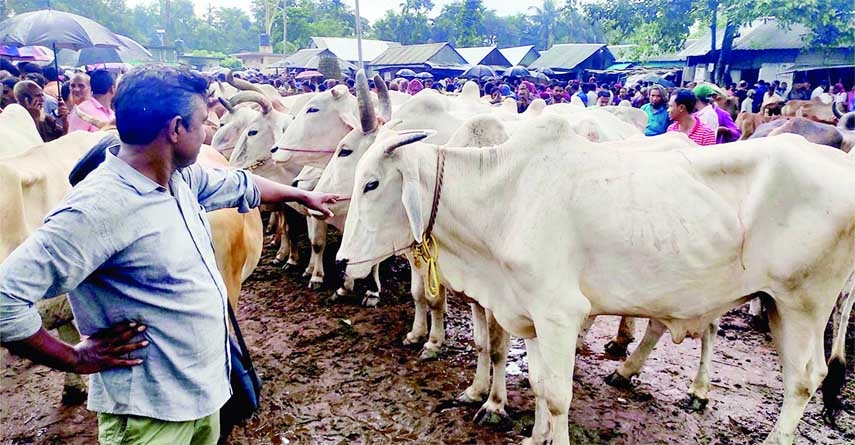 Syed Shemul ParvezÂ  :
Illegal infiltration of Indian cattle has a major impact on the sale of domestic cattle every year in the country. As there is no corridor, there is no legality of importing Indian cattle. However, long rows of Indian cattle can be seen at the different local border cattle markets including Bhurungamari, Panchbibi, as well as Panchgram upazila of the country.
Due to these reasons, the local farmers have become frustrated. Such a picture was seen recently at the Bhurungamari Korbani market, bordering Kurigram district.
Meanwhile, though the markets of the Dhaka city are full of cows, the arrival of buyers are not seen yet. On Monday (July 4), various markets in the capital were visited and wholesalers from different parts of the country brought cows. However, they are spending lazy time as there is no sign of buyers.
As the price of Indian cattle is lower than the local cows, these large cows are attracting the attention of the wholesalers as well as buyers of the boarder markets. On account of difference in price, everyone is turning away from the local cows and leaning towards those cows which have come on the way of thieves. Small and big farms and marginal farmers are in trouble.
Aynal Haque, a farmer from Banshjani village in Bhurungamari upazila, saidÂ  that the government had not set up any corridor for Indian cattle and there is no shortage of Indian cattle in the markets. Those of us who come to Korbani Haat to sell domestic cows in the hope of making a profit by working all year round on small and big farms, now we have to sell our cows at very low prices under the influence of Indian cows. Due to this reason, many farms have closed down their farms every year.
Jalal Uddin, a cattle seller from Char Bhurungamari village in the same upazila, said, "We bought Indian cattle from Border Hat." I don't know how they bring the cows from India. However, I could not bring more cows this time than last year.
When asked about the price of Indian cattle, he said that the price of cattle in India is lower. But the price is a little higher
because people of different levels have to pay until these cows are brought to the country. No one will be able to do business without loss, he added.
Mahtab Hossain from Andhari village said, "Every year we generally listen that the Indian cows coming are stopped. But when I came to the market, I saw there was no shortage of Indian cattle. So those cows are coming from which direction? "He urged the government to pay attention to the cycle of cattle smuggling like human trafficking. Because the small and big farmers who are taking initiative to eliminate unemployment, they will be in danger if such a situation occurs.
Md. Sakhawat Hossain, a farmer, said that due to the arrival of Indian cattle, traders are not paying much attention to local cattle. Unable to sell the cows, I was forced to return home. Kurigram Livestock Officer Abdul Hai Sarkar said there are about 1,060 farms in the district. The number of cows is more than 9 lakh. Meanwhile, 1 lakh 34 thousand animals are ready for the Eid-ul-Azha. And the demand here is about 90 thousand. The rest of the animals will go to different parts of the country.
Kurigram Battalion (22 BGB) Lt. Colonel Md. Abdul Muttakim said that since the flood situation was all around, Indian cows might come illegally from different directions. They are selling them. Border patrols will be further strengthened on the occasion of theÂ  korbani.
When asked about preparation of the government, ," Zinat Sultana, Deputy Director (farm), Department of Livestock Services (DLS), told the New Nation that around 6, 81532 farms are ready for the Eid-ul-Azha in the country for this year. Besides, there are about 72700 registered firms across the country.
Approximately 1.21 crore sacrificial animals have been prepared this year, which is about 35 per cent higher than last year's total sales, according to the Department of Livestock Services (DLS).
"Last year, traders sold a total of 90.83 lakh sacrificial animals on the occasion of the Eid-ul-Azha, including 40.53 lakh cows and buffalos, and 50.28 lakh goats and lambs, to get business worth Tk 46,000 crore amid the pandemic," Zinat Sultana, said.
"As the pandemic threat is ending, we are expecting much better festival sales and so, additional animals are being prepared," she said.
Of the 1.21 crore prepared for sacrifice, around 46.11 lakh are cows and buffalos while 75.11 lakh are goats and lambs.