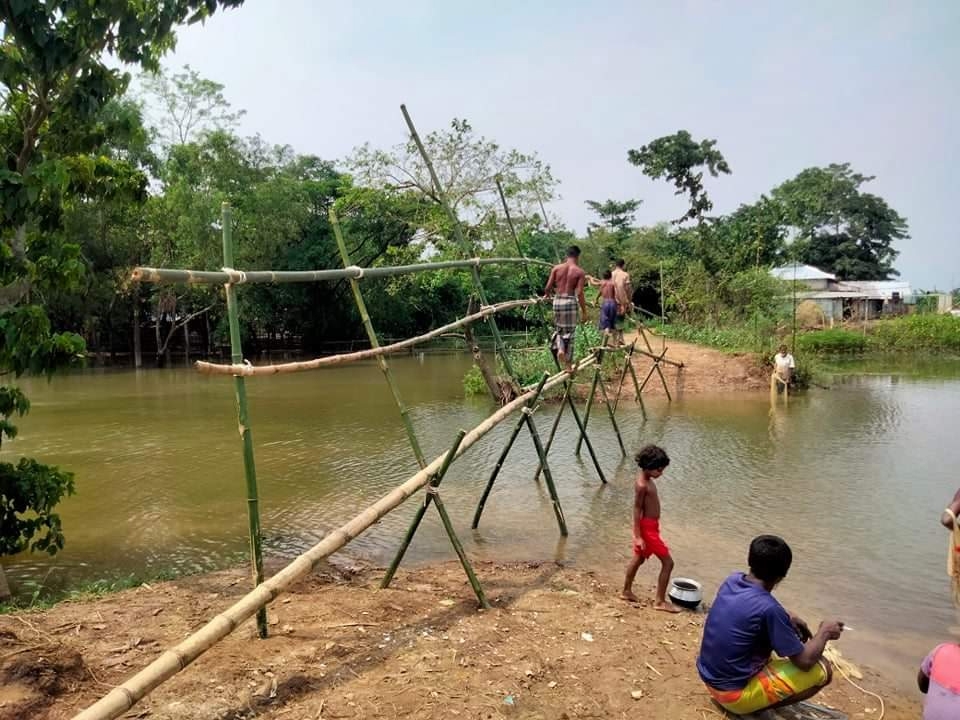 Several thousand people of thirteen villages in Doarabazar upazila in Sunamganj district have been going through unspeakable sufferings for years for want of a concrete bridge over the Chelai River at Hasnabahar Bhanga in the upazila.

Every year the residents of the thirteen villagesÂ  make a makeshift bamboo bridge at their own cost to reach their destinations.

People from all walks of life including farmers, traders and students have to cross the bamboo bridge with goods putting their lives at risk.

Local people claimed that they have informed the matter to the public representatives several times but no visible steps were taken yet as they got only assurances.

The residents of these areas remained neglected for 51 years as the local administration did not pay any attention to the sufferings of the people.

Quamrul Islam, a resident of the upazila, said âHeavy rains have occurred in the upazila for the six months of the year and the roads in the area are in dilapidated condition."

Suffering is common for the residents of the thirteen villages as this is the only way to go to the upazila headquarters, he said.

On many occasions, a number of patients have died before being taken to the hospital due to a lack of better transport and communication system, said Quamrul.

Besides, people from other upazilas of the district feared establishing a relationship with the residents of the upazila for marriage purposes due to the poor condition of communication, he said.

The farmers of Surma union are the worst sufferers as they have to cross the bamboo bridge risking their lives as the makeshift bridge is on the verge of collapse.

Abdul Kadir, a college student of Alipur village, said they cross the bamboo bridge on their bicycle. "Many students fell into the river with their bicycle," he said.

Rahmat Ali, a trader of Sultanpur village, said it is too difficult to cross the long bamboo bridge with goods.

Abdul Halim, chairman of Surma Union Parishad, said: "We will discuss the matter at our monthly meeting as the people of the union are suffering a lot for want of a concrete bridge at Hasanbahar Bhanga point."

Rashedur Rahman, Doarabazar LGED officer, assured that he will investigate it.

Dewan Al Tanvir Ashrafi, Doarabazar Upazila chairman said steps will be taken soon to mitigate the sufferings of the people.