Kalurghat Bridge will be similar to Padma Bridge in design: GM Jahangir 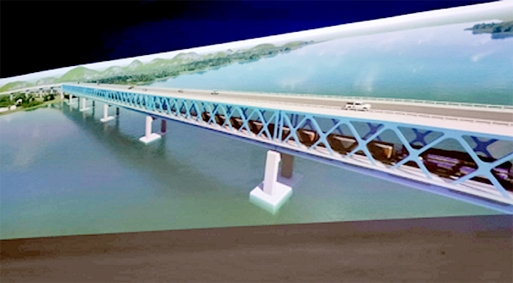 Chattogram Bureau :
One kilometre longÂ  Kalurghat Bridge will be constructed in the concept of Padma Bridge at a cost of Tk6,341 crore. A meeting on the progress of the Kalurghat Rail cum- Road Bridge was held at the Railway Eastern Headquarters CRB on Wednesday to decide on the proposed design and accessories for the new bridge.
After the meeting, Chittagong-6Â  legislatorÂ Â  Moslem Uddin Ahmed told the reporters that the Prime Minister came to inaugurate the third Karnafuli Bridge in 2010. That day we held a public meeting at the CDA ground. There sheÂ  announced that she would also build a new bridge at Kalurghat. In which cars on one side and trains on the other can run. âBut eleven years have already passed. He who was an MP before me also tried, but did not. Unfortunately, due to various complications, it has returned from the ECNEC. But then the cost was much lower. Eventually I started working on it again after I got in charge. Later, there was a tender for the design. The Prime Minister said at the ECNEC meeting that it was time to revise it. There was a misunderstanding.
It was written to build two bridges, one
a railway bridge and the other a solid bridge. Later, when he took the design to the Prime Minister. I did not say that.â There will be only one bridge. It will have cars and train bridges. Besides, there will be two metres and four metres walkways on both sides.
He said that even in the midst of the Corona-era crisis, the ministry and the local resort division, who had talked to the Foreign Ministry for funding, had been re-tendered after repeated talks with the secretary and the minister. Those who had studied earlier in that tender got the job again. As a result, the design was submitted in a very short time. But before that, they have taken some time to talk to the railways and others and make it more beautiful and submit it to the government.
They will submit it next August. That is why a final meeting has been held with the Railways yesterday. Jahangir Alam, General Manager of Eastern Railway, said it would take 6 to 7 months to complete the tender. The full report will be submitted next August. All tender complications will end this year. âI am trying to lay the foundation stone of Kalurghat bridge this year. This bridge will be built in the style of Padma Bridge,â he also said. Â
The car will run upstairs, the train down. There will be a total of three lines. The Korean government will bear all the costs of the bridge.
He said the new bridge would be built 60 metres upstream from the existing bridge. A connecting road will also be built, which will be RoadsÂ  and Highway. Eosin Engineering Corporation, a subsidiary of the state-owned Exim Bank of Korea, has submitted a preliminary proposal to the Eastern Railway Authority on the location, design, cost and construction period of the bridge.