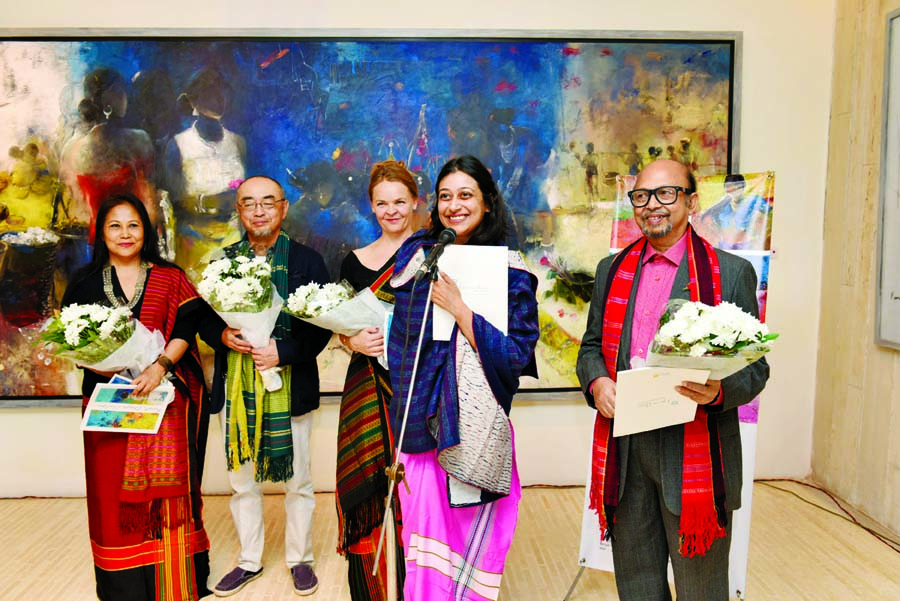 Sheikh Arif Bulbon :
Kanak Chanpa Chakma is acclaimed freelance Bangladeshi artist who have won national and international awards. She was born in Rangamati.
She attended the School of Art, the University of Dhaka and received her Master of Fine Arts degree in 1986. Later, she studied art at Pennsylvania State University in the United States from 1993 to 1994, where she received the Mid-American Arts Alliance Fellowship. She returned to Bangladesh after successful completion of her course.
Kanak Chanpaâs paintings have been featured in over 100 exhibitions at home and abroad, including Australia, India, the United States, Germany, France and England.
Her source of inspiration is the daily life of the Chakma people and the natural beauty of her birthplace, Rangamati.
She uses the accepted language of mainstream art to represent traditional subjects. The different activities of women are the prime focus of her work.
Kanak Chanpa Chakma is now a freelance artiste and involved with some prestigious organisations like The Olympic Fine Art Association.
A solo exhibition of paintings by Kanak Chanpa Chakma titled Life Is Here is being held at Bengal Art Lounge in the cityâs Gulshan area now. Ambassador of Royal Danish Embassy in Dhaka Hanne Fugl Eskjaer, Japanese Ambassador Shiro Sadoshima and eminent artist Hashem Khan jointly inaugurated the exhibition.
Abul Khair, Chairman of Bengal Foundation, Luva Nahid Choudhury, Director General of Bengal Foundation and Nawshin Khair, Director of Bengal Art Lounge were also present on the occasion. Â
Acclaimed for her colourful depiction of daily life in the Chittagong Hill Tracts region, Kanak Chanpa reveals a new dimension of her talent in Life is Here.
The exhibition is conceived as a tribute to the Chakmas, a community of the Hill Tracts region of which Kanak Chanpa is herself a member. The painter does not pretend to realism: there is no explicit reference in this exhibition to the pressing social, economic and environmental issues that the indigenous people of the hills - orÂ  as they are sometimes referred to - are faced with. Women feature dominantly in Kanak Chanpaâs canvases. Carrying baskets or dreaming by the pond, they show strength and grace at once.
Built on the long-standing relationship between the artist and Bengal Foundation, Life is Here opens a window on the latest phase of the development of Kanak Chanpaâs immense artistic talent.
The exhibition will continue till December 6. n