Iraqi protesters storm parliament for second time in a week 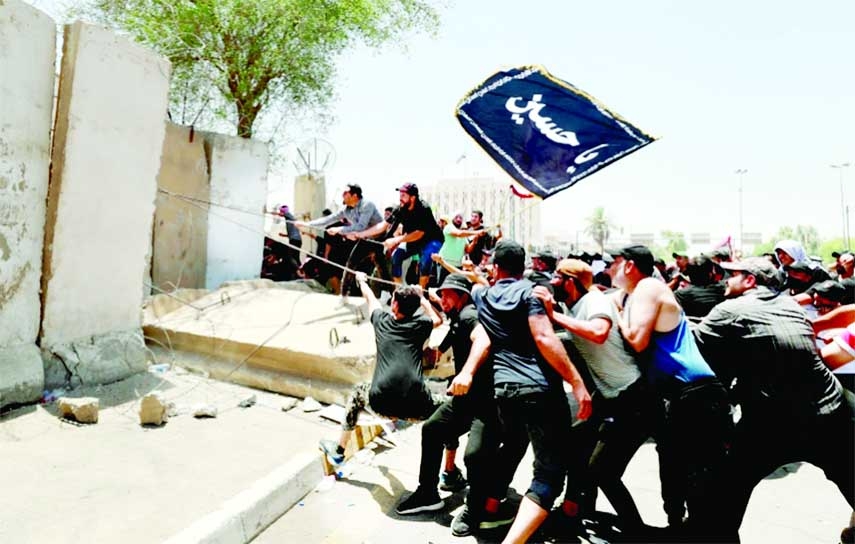 Al Jazeera :
Protesters have once again breached Iraq's parliament in a show of support for influential Shia leader Muqtada al-Sadr, days after they stormed the legislative body and suspended a session to nominate a new prime minister.
Security forces on Saturday fired tear gas canisters and hurled sound bombs as demonstrators used ropes to pull down and climb over a number of large concrete barriers surrounding the Green Zone, which cordons off government buildings and foreign embassies.
"All the people are with you Sayyid Muqtada," the protesters chanted, using his title as a descendant of the Prophet Muhammad. The media office of Prime Minister Mustafa al-Kadhimi had issued a statement calling on security officers to guarantee the safety of state institutions.Â  Al Jazeera's Mahmoud Abdelwahed, reporting from Baghdad, said the protesters did not back down despite reports of several injuries.
He added that on Wednesday, when a large crowd occupied the parliament building, security forces had let the large crowds enter the perimeter relatively unhindered.
Demonstrators oppose the candidacy of Mohammed Shia al-Sudani, a former minister and ex-provincial governor, who is the pro-Iran Coordination Framework's pick for the premier's post.
A vote heralding al-Sudani to the post of prime minister was scheduled to take place on Saturday, but the session was suspended after Wednesday's events.
Abdelwahed said al-Sadr's supporters had gathered again because they did not trust parliament not to go ahead with the vote. "They say that the fact the session has been suspended does not mean that voting cannot go on behind closed doors," he said.
Al-Sadr's bloc emerged from elections in October as the biggest parliamentary faction but still fell far short of a majority.
Ten months on, the deadlock persists over the establishment of a new government - the longest period since the 2003 invasion by the United States reset the political order in the oil-rich country.
Al Jazeera's Dorsa Jabbari said people are demanding change. "They don't want the previous corrupt politicians to stay in power, they don't want the country to have any [interference] by the United States and Iran," the reported said, speaking from inside the occupied parliament.
"We are here for a revolution," said protester Haydar al-Lami.
"We don't want the corrupt, we don't want those who have been in power to return â¦ since 2003 â¦ they have only brought us harm."
Although al-Sadr's alliance won the most seats in October's parliamentary election, squabbling political parties failed to reach the two-thirds majority needed to pick a president - an important step before a prime minister can be selected.
After the negotiations stalled, al-Sadr withdrew his bloc from parliament and announced he was exiting talks on forming a government.
Mass mobilisation is a well-worn strategy of al-Sadr, a mercurial figure who has emerged as a powerful force with a nationalist, anti-Iran agenda.
Zeidon Alkinani, an analyst with the Arab Center in Washington, told Al Jazeera that "we shouldn't be surprised that al-Sadr's supporters are able to enter government premises, in contrast to the protests that began in 2019."
Political movements such as the Sadrist movement "have infiltrated the ministry of interior affairs and of defence, meaning that it is very easy for them to bypass any security checkpoints," the analyst said.
Wednesday's storming of parliament came after al-Sadr's Tehran-backed political rival, former Prime Minister Nouri al-Maliki, nominated a pro-Iran politician to be Iraq's new leader.
"Another layer to this crisis is the personal rivalry between al-Maliki - who is the most influential politician in the Coordination Framework - and al-Sadr," Alkinani said.
"This rivalry has been going on since 2006. It's an ideological and military rivalry that has been affecting the daily life of ordinary Iraqis."
By convention, the post of prime minister goes to a leader from Iraq's Shia majority.
Al-Sadr is the son of Grand Ayatollah Sayyid Muhammad Muhammad-Sadiq al-Sadr, a Shia dignitary who was politically active against the former leader Saddam Hussein, which he paid with his life in 1999.