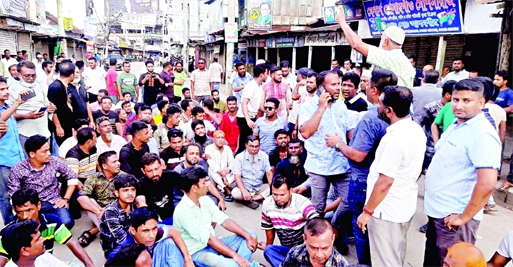 Staff ReporterÂ  :
The Bhola clash between BNP men and police a couple of days ago claimed life of another activist who succumbed to injuries on Wednesday, raising the death toll to two.
The deceased was the Chhatradal district unit President Nur-e-Alam who was on life support in a private hospital in the capital after being bullet injured in the clash with police on July 31.
In protest of the death, local BangladeshÂ  Nationalist Party (BNP) called a dawn-to-dusk hartal in Bhola for Thursday.
BNP has demanded fair investigation into the incident and to bringÂ  the responsible persons to justice.
Meanwhile, our district correspondent quoting the local BNP leaders said,
Â "Soon after the clash, bullet injured Nur-e-Alam was whisked off to the Bhola Sadar Hospital. After preliminary treatment, he was taken to Barishal Sher-e-Bangla Medical where the doctors referred him to National Institute of Neurosciences and Hospital in Dhaka on Sunday. Later he was shifted to Comfort Hospital."
Bhola unit General Secretary Alamin Howladar said that Nur-e-Alam died died around 3:15 on Wednesday.
The 20-party alliance including BNP Secretary General Mirza Fakhrul Islam Alamgir expressed deep shock and protested the police action on the peaceful programme of BNP in Bhola.
Earlier, Bhola district BNP brought out a procession from the party's district office premises in the Mohajanpatti area on Sunday in protest against nationwide load-shedding.
But a clash broke out with the BNP leaders and activists when police intercepted the procession.
Later, police lobbed teargas shells and fired rubber bullets to bring the situation under control that left Swechchasebak Dal leader Abdur Rahim killed on the spot.
Police and witnesses said at least 50 people including Officer-in-Charge of Bhola Sadar Model Police Station Arman Hossain were injured in the clash.
With the killing of Abdur Rahman, BNP announced two day protest programme on Sunday and Monday. BNP held Gayebana Janaza of Abdur Rahman on Sunday across the country.
During the Janaza Mirza Fakhrul said, "The 'fascist' government wants to suppress our movement by killing people with bullets. But movement cannot be stifled with bullets. The government has to be toppled through movement,"
He also urged the leaders and workers to vow to carry out their democratic movement against the 'fascist' Awami League government.
Even BNP said that the blood of Abdur Rahman and Nur-e-Alam will not go in vain.