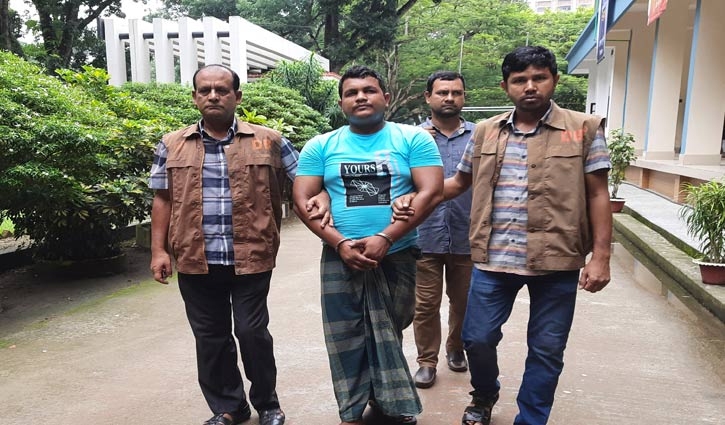 Police on Thursday claimed to have arrested one of the seven armed robbers who allegedly hijacked a Chattogram-bound bus in Tangail, looted commuters and raped a young woman.

The spine-chilling crime occurred in the Raktipara area of Tangail's Madhupur upazila, off the Dhaka-Tangail Highway, in the early hours of Wednesday when the bus was on its way to Chattogram from Kushtia.

"The arrestee has been identified as Raza Mia, 32, son of Harun of Kalihati upazila in Tangail. Raza was nabbed from the Deula area of Tangail district town this morning," Sarkar Md Kaisar, superintendent of Tangail Police, told reporters.

During interrogation, Raza told cops that he was the one who drove the bus while others held the passengers and staff hostage at gunpoint.

"Raza is a driver of âJhatika Serviceâ bus in Tangail and lived in a rented house in the Tangail new bus terminal area," the SP said. "Efforts are on to nab the others."

Posing as passengers, the seven boarded the bus in two groups in a span of 10 minutes around 11pm on Tuesday after it resumed its onward journey following a stopover at a hotel in Sirajganj district.

SP Kaisar said that 24 people, including 22 passengers and two staffers, were on board the bus of âEagle Paribahanâ at the time.

"Around 12am on Wednesday, when the bus took the busy Dhaka-Tangail Highway in the Natiapara area, the seven robbers whiffed out guns, hijacked the vehicle, and drove it towards Madhupur upazila," the SP said.

On a desolate stretch, the armed gang robbed the commuters of cash, jewellery and mobile phones. "The robbers then blindfolded the passengers and raped the woman commuter on board," the SP said.

The passengers' ordeal continued for over three hours till the seven criminals forced them to get off the bus and drove the heavy vehicle towards Raktipara's Jam-e-Mosque, where they abandoned it and fled with the booty, police said.

"An FIR has been lodged in connection with the robbery and rape. We will produce Raza in a court and seek his remand for custodial interrogation," said SP Kaiser.