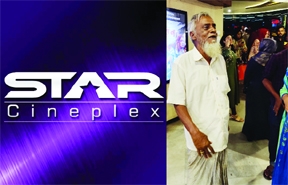 Entertainment Desk :
Star Cineplex has recently posted on social media apologising to a customer who they refused to sell tickets to as he was wearing a lungi.
The apology post comes after the video of the customer uttering his agony circulated online and sparked widespread criticism.
In the video the elderly man who perhaps went to Sony square branch of Star Cineplex with much enthusiasm to watch Poran was saying, âThey did not sell tickets to me because I am wearing a lungi.â
Star Cineplex, the countryâs largest cinema chain, clarified in the Facebook post that they do not discriminate against customers based on anything. âWe would like to clarify Star Cineplex does not discriminate against customers based on anything, least of all a personâs attire. No such policies exist at our organisation that would deny a person the right to purchase a ticket because of them choosing to wear a lungi. We want to emphasise everyone is welcome to experience their favourite movies at our cinema halls,â reads the official statement of the Star Cineplex.
The organisation called the incident to be the result of an unfortunate misunderstanding and thanked the relevant parties for bringing it to their attention. âWe are deeply shocked to see such an event take place and grateful to the relevant parties for bringing it to our attention. We, at Star Cineplex, are committed to deliver the best cinematic experience possible to our customers and we would like to warmly invite this person alongside his family at our Sony Square branch to watch Poran. Furthermore, we are investigating this incident as we speak so as to ensure no such misunderstandings take place in the future. Thank you for being with us.â
Audiences were not content with Cineplexâs clarification and demanded the ticket seller who refused to sell the ticket to publicly apologise to that person.