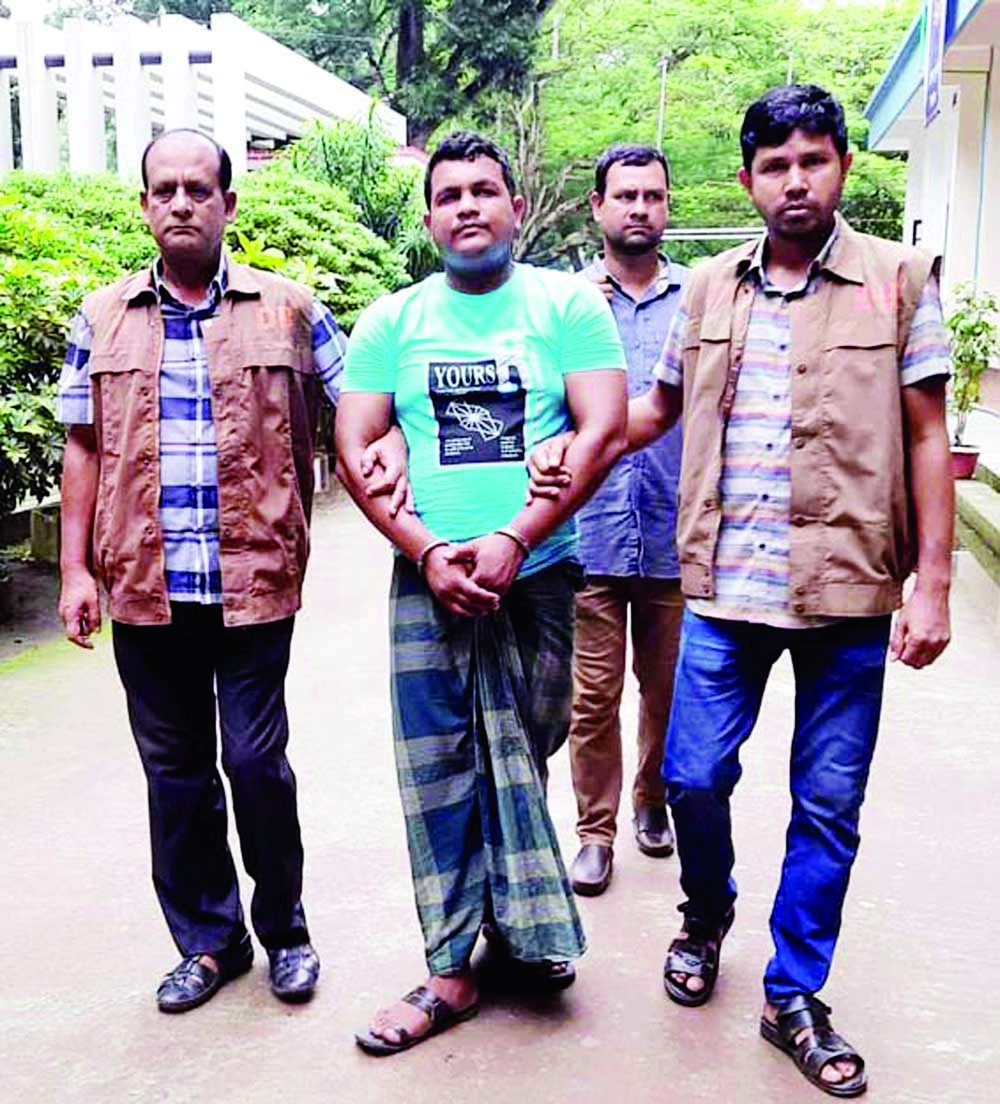 Tangail Detective Branch of Police arrested one Raja Mia (32), mastermind of gang-rape and robbery in the running bus. NN photo

Staff Reporter :
The Detective Branch (DB) of police have arrested bus driver Raja Mia, the mastermind and main accused in the case filed over robbery and gang rape after taking control of a running passenger bus in Tangail at dawn of Wednesday.
Sarkar Mohammad Kaiser, Superintendent of Police, Tangail, confirmed the matter to the media saying that a passenger as plaintiff from Kushtia filed a case against 10 to 12 unknown persons as accused in this incident.
According to police, a passenger bus name Eagle Transport left Kushtia for Dhaka with 24-25 passengers on Tuesday night. When it reached Sirajganj late at night, some robbers boarded the bus in disguise of passengers. After the bus crossed the Bangabandhu Bridge, the gang took control of it. Later, they tied the hands, feet and eyes of all passengers in the bus and beat them and lootedÂ  cash money and mobile sets. At that time, a woman was raped by a group of robbers inside the bus and around 3:30 O'clock at night, they fled after leaving the bus near Raktipara Jame Masjid in Madhupur Upazila of Tangail.
Later, the rape victim was rescued and rushed to Upazila Health Complex and then at Tangail General Hospital for physical check-up.
Mohammad Mazharul Amin, Officer-in-Charge (OC) of Madhupur Police StationÂ  said that bus driver Raja Mia had been arrested in this incident.
Arrested Raja Mia is the son of Harun ur Rashid from Balla village of Kalihati upazila. He lived in a rented house in the new bus stand area of Tangail city.
An operation is underway to arrest the rest of the accused, OC said.
Meanwhile, Dhaka Metropolitan Police (DMP) Commissioner Shafiqul Islam said that Detective Branch (DB) of Dhaka Metropolitan Police (DB) is working to arrest those involved in the robbery and rape in a passenger bus in Tangail.
Although the incident is in Tangail, Tangail police as well as DMP's intelligence department are jointly trying to arrest those involved, he said.