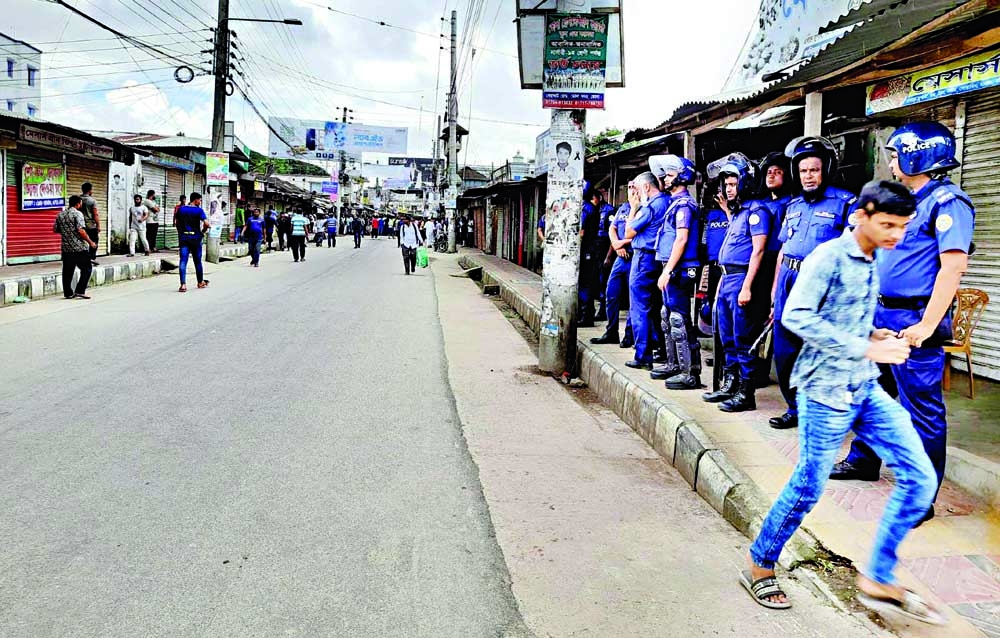 Hartal was observed at Bhola on Thursday in response to the BNP\'s call to protest killing of the district JCD president Nure Alam. NN photo

Staff Reporter :
Khadiza Begum, widow of deceased BNP activist Abdur Rahim filed a case with the Senior Judicial Magistrate's courtÂ  against 36 policemen including the officer-in-charge of Bhola model police station the death of Swechchasebak Dal activist Abdur Rahim in "police firing" during a clash between BNP activist and police.
Meanwhile, the Bhola unit of Bangladesh Nationalist Party (BNP) that began a dawn-to-dusk hartal on Thursday morning protesting against the death of Jatiyatabadi Chhatra Dal district unit President Nure Alam and party activist Abdur Rahim in a clash between police and supporters of BNP was withdrawn after six hours.
However, the namaz-e-janaza of Bhola district unit JCD President Md Nure Alam was held in front of the BNP's central office in the city's Nayapaltan at 1pm on Thursday.
BNP secretary general Mirza Fakhrul Islam Alamgir blamed the ruling Awami League government for the death of Noor-e- Alam and Abdur Rahim in alleged police firing in Bhola.
Fakhrul made the remarks in a brief address prior to a namaz-e-Janaza of Bhola District unit JCD President Noor-e-Alam in front of BNP's Nayapaltan central office.
Mirza Fakhrul said that there is no greater pain than bearing the dead body of a son on the shoulder of a father.
"We are seeing in front of us the body of our son Bhola JCD President Nur-e-Alam as he was shot dead by the police forces of the Awami League government," he added. He further said that Bhola District Swechchasebak Dal leader Abdur Rahim was also shot dead while 19 more people are fighting for their survial at hospitals in Dhaka and Barisal.
Abdur Rahim's wife Khadiza Begum filed the case with Senior Judicial Magistrate Ali Haider's court on Thursday following a complaint.
Bhola Model Police Station OC Arman Haque was made the main accused in the case, said plaintiff's lawyer Amirul Islam Baset.
According to the complaint, on 31 July, Abdur Rahim was shot dead by OC Arman Hossain as a clash broke out between police and BNP activists during a demonstration of the party and its likeminded political groups against the ongoing load shedding and mismanagement in the power sector. The case was filed under section 302 and 304 of the Penal Code, he said.
However, OC Arman Hossain told UNB he was not yet informed of any case filed against him in this regard.
"I was performing my duty on that day and was not intending to hurt anyone. The rally was illegal. BNP activists rather attacked police, opened fire on them and injured our members," he said.
On Sunday, as part of BNP's countrywide demonstration programme the leaders and activists of the party gathered in front of their district party office in Bhola.
At one stage, police obstructed them when they tried to stage demonstrations at Kalinath Roy Bazar around 11:30am, triggering a clash.
Later, police fired bullets and lobbed teargas shells that left local Swechchasebak Dal leader Abdur Rahim dead and some other leaders and activists of the party injured including Jatiyatabadi Chhatra Dal (JCD) district unit president Noor-e-Alam.
However, district BNP president Golam Nabi Alamgir announce the withdrawal of the hartal in a press conference at the party office at Mahajanpatti of the district town at about 12:00 noon.
The BNP leaders also thanked the people of the district for observing the strike spontaneously.
During the hartal hours, the protesting BNP members staged demonstrations and brought out processions in different parts of the district. Most shops and business establishments on Mahajanotti Sadar Road and the BNP office area remained shut.
Only a few vehicles were seen plying on the roads in the district. However, long-route buses were seen plying on the Bhola-Charfashion route.
Besides, law enforcers were deployed at some major places of the district town to avoid any untoward situation.
Nure Alam sustained bullet wounds during the clash with the police on July 31.
He was taken to Comfort Diagnostic Centre in the capital on the same day, where he succumbed to his injuries at about 3:00pm on Wednesday. He had been on life support at the hospital.
Earlier at 11:45am, the body of Nure Alam was taken to Nayapaltan from Dhaka Medical College Hospital. At that time, the leaders and activists of different associate organizations of BNP including JCD and Juba Dal paid their last respect to him.
After the janaza, Nure Alam's body was taken to his village home in Bhola.
It is to be noted that, Nure Alam, who was on life support in a Dhaka hospital after suffering a birdshot injury from police shooting at BNP activists on July 31, died on Wednesday.