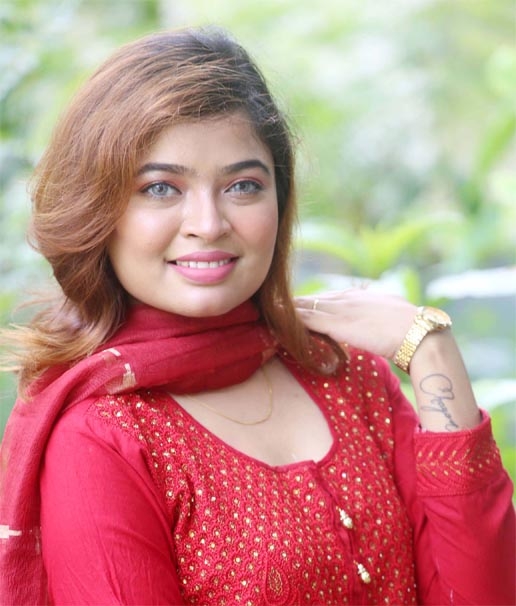 Sheikh Arif Bulbon :
Moumita Barua is a popular singer of present generation.
She has engagement with cinema, drama and modern songs. In last Eid, her rendered songs were used in two dramas. Moumita rendered the title song for Sazin Khanâs drama
Pop Girl, which title was Aj Aamar Mon Bhalo Nei. She also
rendered a song titled Bare Bare Tomake for Mabrur Rashid Bannah directed Eid special drama titled Hatte Chai Tomar Pashe. Basically for these two songs Moumita is getting response from the viewers. In fact, now application of song
in Bengali drama has become a pivotal matter. The singers, who render songs, at one stage in the field of music, they become busy with these songs.
Moumita is regular in rendering songs for dramas. There is specifically a demand for melodious voice. For this reason, demand of Moumitaâs voice is being increased day by day. The lyrics of the song Aj Aamar Mon Bhalo Nei was written by Shahriar Rafat who has also composed its music. On the other hand, Shovon Roy has composed the song Bare Bare Tomake.
Meanwhile, Moumita rendered two other new original songs have already been released. These songs are: Moner Bahon Tui (lyrics were written by Prosenjit Ojha and music was composed by Sumon Kalyan), and Ruper Karigor (lyrics were written by Prosenjit Ojha and music was composed by Shovon Roy. Moumita is getting positive response for rendering these two songs now. But in Moumitaâs life, a new chapter has been opened. That is the singer has lent her voice for a song titled Ekti Chhele, which lyrics were written by noted lyricist Gazi Mazharul Anwar. Music of this song was composed by Close Up 1 famed singer Apu Aman. According to Moumita, this song will be blessing for her because getting the scope to render a song which lyrics were written by Gazi Mazharul Anwar. It is really a great achievement for her. Â
Moumita sees many dreams with music. While talking in this regard, the singer said, âI am grateful to them who are giving me opportunity to render songs in their projects regularly. As a singer, I am very simple. I can say I am learning music regularly. Keeping myself in devotion I have been practicing music frequently. After 10 years, I want to see myself in that position where new generation's singers render my songs like I rendered songs of my previous generation's singers. I also want to establish a music school where correct songs will be taught. I believe God will fulfil my dream because I believe I am an honest person. I never did any harmful activity for people and also never became cause for harmfulness for anybody. So, I strongly believe God will become blessing to fulfil my dream.â