Movie Ora Shatjon to be released in December, gets Censor Boardâs clearance 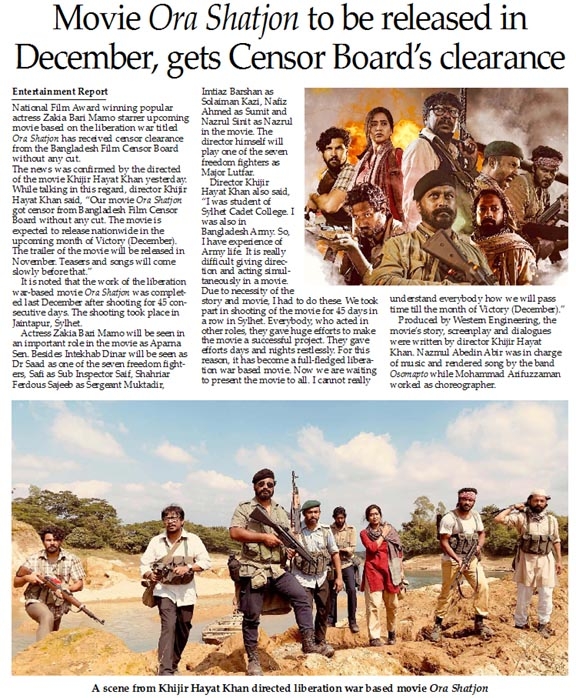 Entertainment Report :
National Film Award winning popular actress Zakia Bari Mamo starrer upcoming movie based on the liberation war titled Ora Shatjon has received censor clearance from the Bangladesh Film Censor Board without any cut.
The news was confirmed by the directed of the movie Khijir Hayat Khan yesterday.Â  While talking in this regard, director Khijir Hayat Khan said, âOur movie Ora Shatjon got censor from Bangladesh Film Censor Board without any cut. The movie is expected to release nationwide in the upcoming month of Victory (December). The trailer of the movie will be released in November. Teasers and songs will come slowly before that.â
It is noted that the work of the liberation war-based movie Ora Shatjon was completed last December after shooting for 45 consecutive days. The shooting took place in Jaintapur, Sylhet.
Actress Zakia Bari Mamo will be seen in an important role in the movie as Aparna Sen. Besides Intekhab Dinar will be seen as Dr Saad as one of the seven freedom fighters, Safi as Sub Inspector Saif, Shahriar Ferdous Sajeeb as Sergeant Muktadir, Imtiaz Barshan as Solaiman Kazi, Nafiz Ahmed as Sumit and Nazrul Sinit as Nazrul in the movie. The director himself will play one of the seven freedom fighters as Major Lutfar.
Director Khijir Hayat Khan also said, âI was student of Sylhet Cadet College. I was also in Bangladesh Army. So, I have experience of Army life. It is really difficult giving direction and acting simultaneously in a movie. Due to necessity of the story and movie, I had to do these. We took part in shooting of the movie for 45 days in a row in Sylhet. Everybody, who acted in other roles, they gave huge efforts to make the movie a successful project. They gave efforts days and nights restlessly. For this reason, it has become a full-fledged liberation war based movie. Now we are waiting to present the movie to all. I cannot really understand everybody how we will pass time till the month of Victory (December).âÂ  Â
Produced by Western Engineering, the movieâs story, screenplay and dialogues were written by director Khijir Hayat Khan. Nazmul Abedin Abir was in charge of music and rendered song by the band Osomapto while Mohammad Arifuzzaman worked as choreographer.