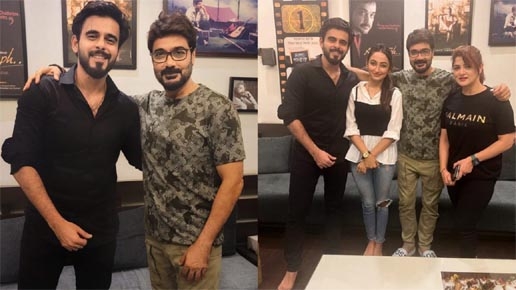 Entertainment Desk :
Popular actor of present generation, Siam Ahmed is taking preparation for his Tollywood debut and shared some pictures with the casts of the movie Prosenjit Chatterjee, Srabanti Chatterjee and Ayushi. Siam clicked the photos during his visit to Kolkata.
Sharing a picture with renowned actor Prosenjit also known as Bumba Da, Siam revealed how the popular Indian actor is admired by both him and his mother. Siam Ahmed wrote on his Facebook, âWe have made some wonderful moments. He (Prosenjit) is an extremely humble person. I am really excited to share the screen with Bumba Da.â
âProsenjit is my motherâs favourite actor and my mother is glad that I will be sharing the screen with him. I am eager to learn many things from the legendary actor while working with him,â Siam also said.
The yet-to-be-titled movie is to be directed by Sayantan Ghosal which is slated to chronicle the theme of family bonding.
Siam also said that the shooting of the movie, produced under the banner of Shadow Films and Roadshow Films, is scheduled to start in London later this month.