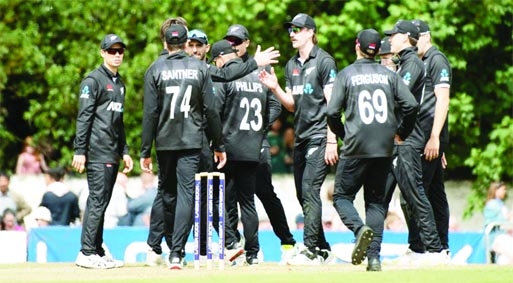 Players of New Zealand celebrate after dismissal of Stephan Myburg of Netherlands in their first Twenty20 International match at The Hague in Netherlands on Thursday.

AFP, Voorburg :
A blistering bowling attack saw New Zealand beat Netherlands by 16 runs in the Black Caps' penultimate T20 International (T20I) match of their European tour on Thursday.
Winning the toss and opting to bat, Kiwi captain Mitchell Santner's team battled to get going on a sluggish hybrid pitch at the scenic Voorburg Cricket Club.
Driven by a determined 45 off 36 balls by veteran batsman Martin Guptill and a late flurry of shots by Jimmy Neesham and Ish Sodhi, New Zealand scraped together 148 after 20 overs-just enough to see them fend off a determined Dutch fightback in the second innings.
"It was probably a slow wicket, but we did well to scratch to 150," Santner said after the match.
"The quickfire runs changed the momentum for us. Taking wickets during the powerplay was key," he said.
Paceman Blair Tickner ripped into the Dutch batting line-up, claiming the scalps of both openers, veteran Stephan Myburgh (5) and Max O'Dowd (2).
Tickner ended with figures of 4-27 in 3.3 overs, followed by Ben Sears who returned an impressive 3-22.
The Dutch staged a feisty fightback, led by rising star Bas de Leede, who hit a hard-charging 66 off 53 balls, including five fours and two sixes.
De Leede put on a 49-run partnership for the fourth wicket with Scott Edwards before the Dutch captain fell to a brilliant catch by Glenn Phillips off the bowling of Santner for 20.
Earlier, disciplined Dutch fielding and tight spin-bowling by the Netherlands restricted New Zealand to 148-7.
The Black Caps appeared well-set to pass 200 until Neesham was brilliantly caught by De Leede on the boundary off a full toss.
The Dutch, much improved from their performance in the field against England earlier in the season, remained sharp.
Their best bowler, the diminutive Shariz Ahmad caught and bowled a dangerous-looking Phillips (14) and ended with figures of 2-15 in three overs.
"The 148 definitely looked makeable," Edwards lamented after the game. 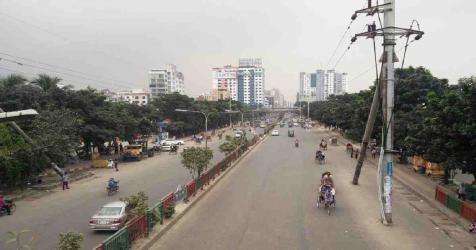