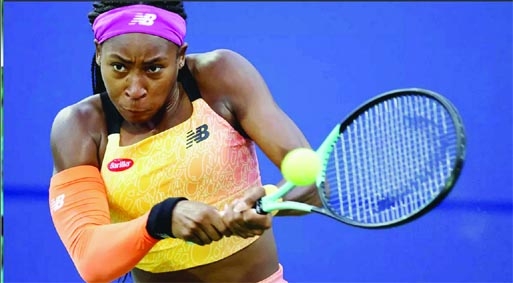 AFP, San Francisco :
American teenager Coco Gauff built a big lead early then had to dig deep late for a 6-4, 6-4 victory over four-time Grand Slam champion Naomi Osaka Thursday at the WTA hardcourt tournament in San Jose, California.
The 18-year-old, who reached her first Grand Slam final at the French Open in June, needed just one break of serve to seize the first set 6-4 in the blockbuster encounter.
With booming serves and matching ground strokes, she then roared to a 5-1 lead in the second set.
But the Japanese superstar, unseeded in her first tournament since an opening-round exit at Roland Garros, didn't go down without a fight.
She saved match points-all on her own serve, before Gauff was finally able to serve it out.
Down 5-1 and 0-40, Osaka uncorked a string of big serves that kept Gauff at bay. Gauff would get one more chance in that game but hit a backhand service return into the net before Osaka fired her first ace of the match for a game point on the way to a hold of serve.
Osaka recouped a break in the next game and survived triple match point again in the next game to cut the deficit to 5-4.
Gauff finally held her nerve after a double fault to make it 30-30, winning the next two points, including a 104 mph second serve on match point to seal the win.
"Even though I was up 5-1 and 40-0 I knew I didn't have the match in the bag yet and obviously she proved that," Gauff said.
"Whenever you play Naomi she can play lights-out tennis. I feel like maybe two of the match points I had an actual shot on.
"Other than that, ace, ace, unreturnable, winner," Gauff said with a laugh.
"So, I wasn't, like, too mad," Gauff said. "I was just like, eventually it will calm down and if it doesn't calm down then it's probably not my day.