Declares ending coop with US on multiple issue 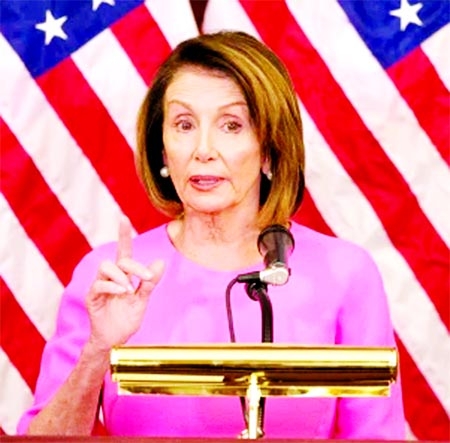 News Desk :
China has announced unspecified sanctions on Nancy Pelosi and her immediate family, following the visit by the speaker of the United States House of Representatives to the self-ruled island of Taiwan earlier this week.
A Chinese foreign ministry statement on Friday said Pelosi had disregarded China's concerns and resolute opposition to her visit - China claims Taiwan as its territory and opposes it having its own engagements with foreign governments.
China on Friday also said it was cancelling several defence meetings and suspending key climate talks with the United States after a visit by US House Speaker Nancy Pelosi to Taiwan this week, reports AFP.
Beijing will "suspend the China-US climate change talks" and nix plans for a call between military leaders as well as two security meetings, the foreign ministry said, citing Pelosi's "disregard of China's strong opposition and stern representations" on the Taiwan visit.
There were no details about the sanctions on Pelosi, but such moves are generally mostly symbolic in nature.
Slamming her trip as a provocative action that undermined China's sovereignty and territorial integrity, Beijing has moved to halt cooperation with the US on eight specific
measures, including climate change, military issues, anti-drug work, talks on cross-border crime prevention and on repatriating undocumented migrants.
It has also held live-fire drills in waters near Taiwan - the largest conducted by China in the Taiwan Strait - that are expected to go on until Sunday.
Pelosi, the second in line to the presidency, was the highest-ranking US official to visit Taiwan in 25 years.
On Thursday, the White House summoned Chinese ambassador Qin Gang to condemn escalating actions against Taiwan and reiterate that the US does not want a crisis in the region.
Japanese Prime Minister Fumio Kishida, who met Pelosi in Tokyo on Friday, said China's military exercises aimed at Taiwan represent a "grave problem" that threatens regional peace and security. He added that the missile launches need to be "stopped immediately".
For her part, Pelosi said China could not stop US officials from visiting Taiwan.
"We have said from the start that our representation here is not about changing the status quo in Taiwan or the region," she told a news conference.
"The Chinese government is not pleased that our friendship with Taiwan is a strong one," Pelosi added. "It is bipartisan in the House and in the Senate, overwhelming support for peace and the status quo in Taiwan."
China said it summoned European diplomats in the country to protest against statements issued by the Group of Seven nations and the European Union criticising threatening Chinese military exercises surrounding Taiwan.
China and the United States - the world's two largest carbon emitters - unveiled a surprise climate pact at the COP26 summit in Glasgow last year.
They pledged to work together to accelerate climate action this decade, and vowed to meet regularly to "address the climate crisis".
China views self-ruled, democratic Taiwan as part of its territory and has vowed to one day take it, by force if necessary.
Beijing reacted with bombastic threats and military drills in the lead-up to and aftermath of Pelosi's visit, which it sees as an unacceptable escalation of ties between Washington and Taiwan's current pro-independence leaders.
The foreign ministry said on Friday it was suspending cooperation with Washington on repatriating illegal migrants, judicial assistance and transnational crime, as well as anti-drug action.
It said earlier that it would impose unspecified sanctions on Pelosi and her family.