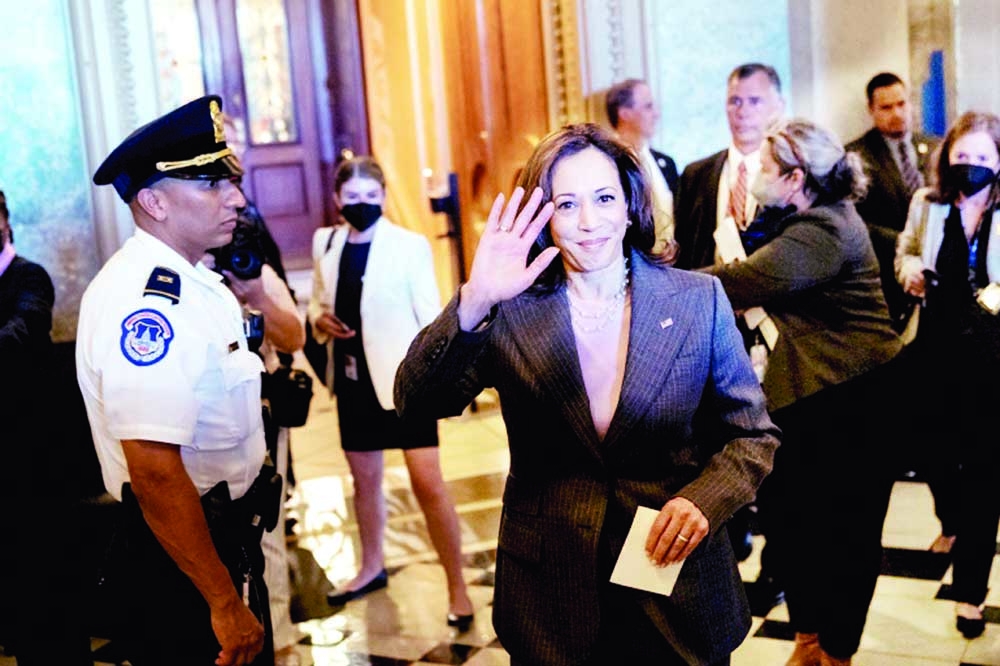 Vice President Kamala Harris waves as she departs the Senate after passage of the Inflation Reduction Act at the U.S. Capitol in Washington, DC on Sunday. Agency photo

BBC Online :
The US Senate has approved a bill that includes $369bn (Â£305bn) for climate action - the largest investment in America's history.
The authors of the Inflation Reduction Act say it will cut the country's carbon emissions by 40% by 2030.
Some households could receive up to $7,500 in tax credit to buy an electric car and $4,000 for a used car.
The bill - a key plank of President Joe Biden's agenda - will now be sent to the Democrat-controlled House.
It is expected to be backed there as soon as this week, before it can be signed into law by Mr Biden.
With the mid-term elections just three months away, the bill's passage will be seen as a boost for the Democrats. As well as climate measures, the sprawling package also includes provisions that its supporters say will lower healthcare costs and increase taxes on large corporations.
It is, however, a scaled-back version of a prior bill that was blocked by two Democrat senators who shared Republican concerns about its cost.
The action on climate comes as the US experiences a wave of extreme weather, including a recent heatwave as well as deadly flooding in Kentucky that left dozens dead. President Biden is expected to visit flood-damaged areas of the state on Monday.
Many factors contribute to flooding, but a warming atmosphere caused by climate change makes extreme rainfall more likely.
The world has already warmed by about 1.1C since the industrial era began and temperatures will keep rising unless governments around the world make steep cuts to emissions.
After a marathon overnight session, Democrats cried with joy and pumped their fists in the air after the bill - a product of 18 months of intense wrangling - was passed in the Senate.
Democrats negotiated among themselves for months to ensure the package totalling more than $700bn received the support of every one of the party's 50 senators, which it required - alongside Vice-President Kamala Harris's tie-breaking vote - to pass the Senate.
The resulting compromise is a significantly scaled-down version of a far more expansive measure that many Democrats had hoped to approve last year.
Democratic Senate majority leader Chuck Schumer said: "After more than a year of hard work, the Senate is making history. To Americans who've lost faith that Congress can do big things, this bill is for you."
Senator Brian Schatz, a Democrat from Hawaii, reportedly cried tears of joy as he left the chamber.
"Now I can look my kid in the eye and say we're really doing something about the climate," he said, according to the New York Times.
Some Republicans have said they will try to stall or block the progress of the bill, which also includes $64bn for healthcare.
Florida's Republican Senator Marco Rubio argued the bill was out of touch as it did not help to lower prices for working people or keep criminals in jail - "the things working people in this country care about".
On Saturday, Congress debated a revised version of the bill, after compromises on the more ambitious original plan were agreed with two key Democratic holdouts, Senators Joe Manchin of West Virginia and Kyrsten Sinema of Arizona.
Mr Manchin had feared the original bill would have exacerbated inflation. Industry measures in the bill include tax credits for clean energy development that will help with the high upfront costs. A new $27bn "clean energy technology accelerator" will be created to help advance renewable technologies.
There will also be $60bn given to communities that have suffered the most from fossil fuel pollution.
President Biden - who has called the bill "historic" - has pledged to return the US to the international stage on climate action. In April last year, he pledged to slash US greenhouse gas emissions by at least 50% by 2030.
Last month, he announced $2.2bn to help build infrastructure that can withstand extreme weather and natural disasters.
This isn't the all-singing, all-dancing climate mega-bill Joe Biden promised when he became president - but if it passes it will be the most ambitious action the US has taken to try to stop the planet overheating.
And the indirect impact could be even more consequential.
President Biden's climate envoy, Senator John Kerry, has been tireless in his efforts to persuade other countries to raise their ambitions on climate change.
But the US faced a credibility gap.
"You can't preach temperance from a bar stool" is how one Democratic Senator put it.
What he means is you can't ask India, China or Brazil to cut emissions unless you are doing so yourself.
That's still a very big ask and things are particularly strained with China right now. Beijing said it is halting co-operation over climate change following senior Democrat Nancy Pelosi's recent trip to Taiwan.
But with the US leading by example, the hope is that international efforts to tackle global warming will be revitalised.