It demands for govt resignation over its failure 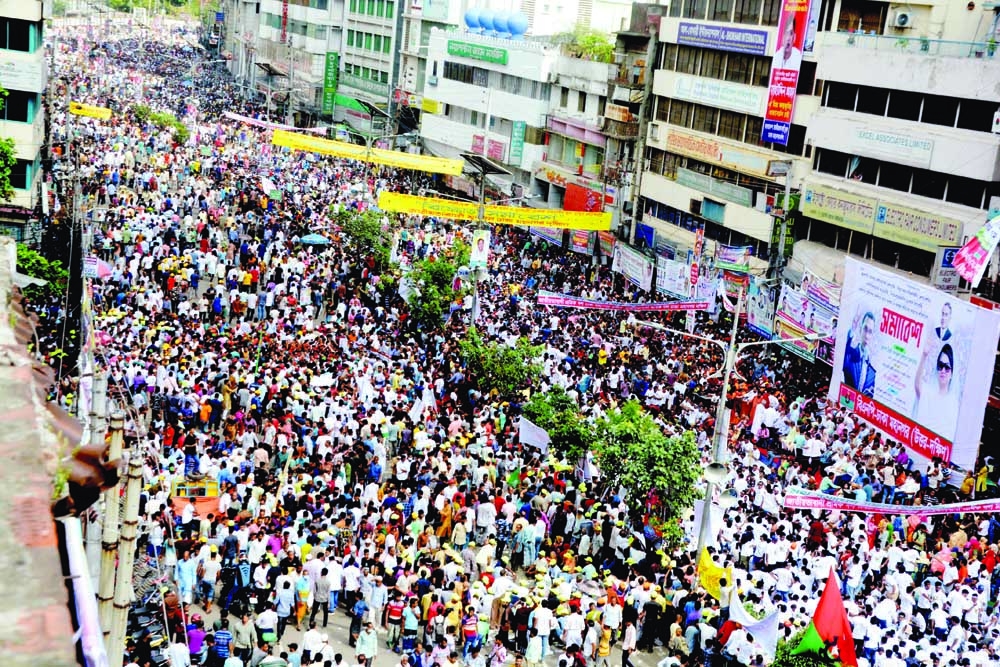 Leaders and activists of BNP stage a huge rally protesting the latest hike in fuel prices, increase of essential commodity prices, higher transport costs and power crisis in front of its Nayapaltan central office in the capital on Thursday. NN photo

Staff ReporterÂ  :
The Sheikh Hasina's government should resign immediately and hands over the power to a neutral government.
BNP Secretary General Mirza Fakhrul Islam Alamgir came up with this while addressing a protest rally in front of its party office in the city's Nayapaltan on Thursday.
BNP staged the demonstration rally protesting the latest "unjustified" hike in fuel prices, killing their two leaders in police firing in Bhola, exorbitant transport fares and the soaring prices of essential commodities.
Thousands of leaders and party workers and its associate bodies with colorful banners and festoons gathered in Nayapaltan to join the rally blocking traffic movement on the adjacent roads and intersections.
The Dhaka North and Dhaka South branches of the BNP organised the gathering to protest the recent hike in fuel prices, rising inflation and "political repression".
The rally is being led by Dhaka Metropolitan South BNP Convener Abdus Salam.
Among others, Members of the Standing Committee Khandkar Mosharraf Hossain, Mirza Abbas, Gayeshwar Chandra Roy, Nazrul Islam Khan, Selima Rahman, Iqbal Hasan Mahmud Tuku, Vice Chairman Abdullah Al Noman, Abdul Awal Mintu, Shamsuzzaman Dudu, A ZM Zahid Hossain, Ahmed Azam Khan, Zainul Abedin, BNP Chairperson's Adviser Aman Ullah Aman and Senior Joint Secretary General Ruhul Kabir Rizvi also spoke on the occassion.
"We have to occupy the roads and streets with a view to topple the government. Parliament should be dissolved right now and a new election commission should be formed. A neutral government will form new election commission for holding a free and fair election," Mirza Fakhrul Islam Alamgir said.
BNP Secretary General has urged the party leaders and activists to unite in anti-government movement from August 22 in every police station and union level across the country.
"We will compel this fascist and illegitimate government to resign through people's united movement. The government should step down immediately taking all responsibilities for their all failures," he said.
The BNP's last rally in Naya Paltan was in November 2021, when they demanded that the party's chief, Khaleda Zia, be allowed to fly abroad for medical treatment despite her prison sentence.
Several hundred law enforcers were deployed in and around the Naya Paltan areas to fend off any undesirable incident.
A stage has been formed joining five trucks parked in front of the BNP central office. Banners at the event protest the fuel price hike, load shedding, the increase in transport costs, inflation in prices of essentials, and the deaths of two BNP activists in clashes with the police.
The entire area was decorated with large portraits of party founder Shahid President Ziaur Rahman, BNP Chairperson and former Prime Minister Khaleda Zia and Acting-Chairman Tarique Rahman.
The rally was organised after securing police permission, metropolitan BNP officials said.
Over 100 megaphones were set up on both sides of the road from the Fakirerpul intersection on Dainik Bangla Road to the Kakrail intersection on the Bijoy Nagar Road.
Activists from various parts of the capital marched through the area to join the rally.
In an abrupt move, the government increased the prices of diesel, octane and petrol by 42.5 per cent, 51.7 percent and 51 percent respectively on August 5.
Currently, diesel is being sold at Tk 114 per litre, octane at Tk 135 per litre and petrol at Tk 130 per litre.
Earlier on Monday, BNP Secretary General Mirza Fakhrul Islam Alamgir announced a two-day program, including the rally, in protest against the latest hike in fuel prices, transport fares and soaring prices of all essential commodities.