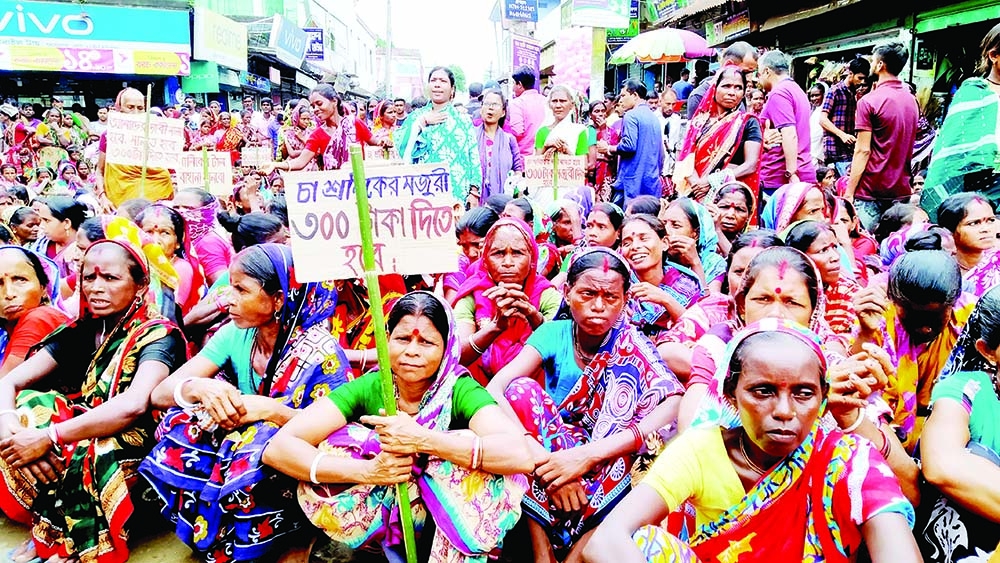 Bangladesh tea garden workers go on strike for an indefinite period in all the country\'s tea gardens on Saturday demanding raising of their wages for the workers. NN photo

Moulvibazar Correspondent :
Bangladesh Tea Garden Workers Union went on strike for an indefinite period in all the country's tea gardens on Saturday demanding rising of their wages for the workers.
Over 1.5 lakh tea garden workers from 231 tea gardens across the country have joined the strike demanding to raise their daily wages to Tk300 from Tk120.
On Saturday, workers of various tea gardens were seen holding protest rallies chanting different slogans justifying their demand.
"We won't stop our movement until meeting our demand," Paresh Kalindi, Finance Secretary of the association said.
Around 2,000 workers of Bharaura Tea Garden blocked the Dhaka-Sylhet highway for one hour from around 12 pm in Moulvibazar, while about 15,000 workers of 21 tea gardens have joined the strike in Chattogram.
Pankaj Kand, Vice-President of the Bangladesh Tea Workers Union, said, "Our demand for raising a worker's daily wage to Tk300 is very reasonable. We have made the demand as all daily essentials have become pricier in recent days."
Bijay Hazra, Organising secretary of the organisation, said, "We are holding the general strike from today as part of the ongoing movement. But the movement will be suspended for the next two days due to the weekend and National Mourning Day. We will sit in a meeting today and decide the next course of action."
Ashu Dash, the Panchayat President of Kodela Tea Garden in Rangunia Upazila of Chattogram, said that around 1,000 workers, permanent and temporary ones, were abstaining from work and that their protest would continue until their demand for a pay hike is not met.
Golam Mohammad Shibli, Chairman of Bangladesh Cha Sangsad, Sylhet, an organisation of tea garden owners, said workers should not go on strike while a discussion on the issue was underway between the two parties.
"It is also against the labour law. If work is stopped during this time of the season, both owners and workers will suffer. We hope workers will return to work soon," he said.
Earlier, tea workers had been observing a two-hour work abstention for a week demanding fair wages. But, as tea garden owners did not accept their demand, the tea workers started the strike.
Workers' daily wage was fixed at Tk120 for two years from January 2019, he said, adding that workers then demanded that the daily pay be raised to Tk300 for the following two years while owners agreed to increase it to Tk134.