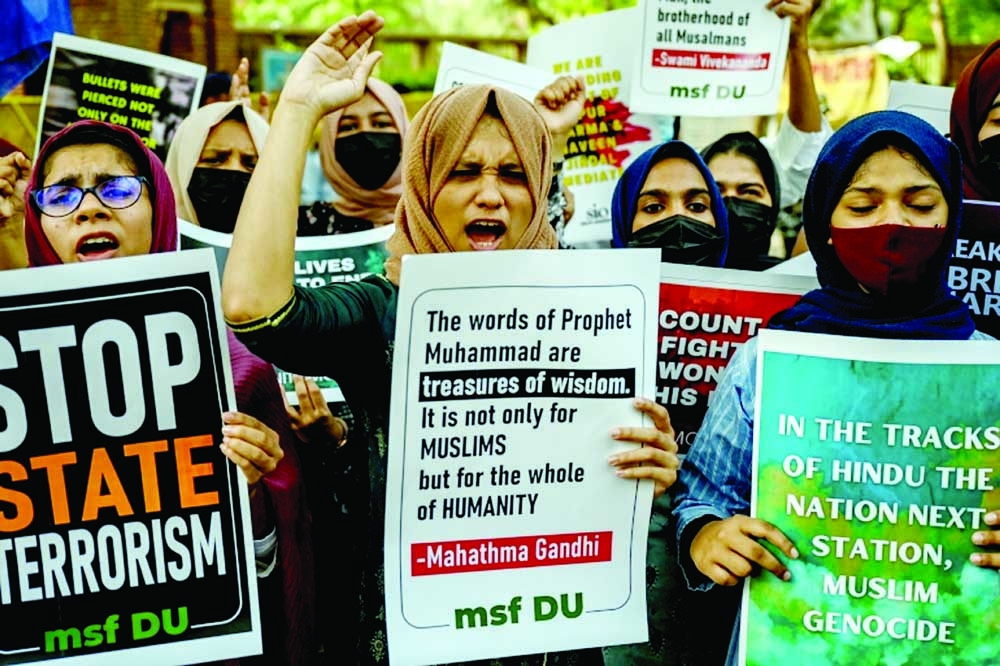 Students demonstrate in New Delhi on Tuesday after another BJP politician made remarks against Prophet Muhammad (PBUH) earlier this year. Agency photo

News DeskÂ  :
Indian police have arrested a state legislator from Prime Minister Narendra Modi's party for promoting enmity in the name of religion after Muslim groups demanded his arrest for his comments about the Prophet Muhammad (PBUH).
The arrest of T Raja Singh, a member of the legislative assembly in the southern state of Telangana, on Tuesday came months after his Bharatiya Janata Party (BJP) suspended a spokesperson for her remarks on the Prophet that led to a diplomatic backlash against India, reports Al Jazeera and news agencies.
Â "He has been charged with promoting enmity in the name of religion," Joel Davis, a senior police official in Hyderabad city, told Reuters news agency. "This is about the recent video that he posted." Hundreds of Muslims protested against Singh on Monday evening after the video appeared on social media, footage from the media showed.
In the video available on social media, Singh, in an apparent reference to the Prophet, said an "elderly man had married a girl decades his junior" - remarks similar to the ones made by BJP spokeswoman Nupur Sharma earlier this year.
The Hindu nationalist BJP on Tuesday suspended Singh for violating the party's code, Indian media reports said.
"You have expressed views contrary to the party's position on various matters which is clear violation of Rule XXV 10 (a) of the constitution of Bharatiya Janata Party," a notice issued by the right-wing party's central disciplinary committee head Om Pathak said.
Â "I have been directed to convey to you that pending further inquiry, you are suspended from the party and from your responsibilities with immediate effect. Please also show cause within 10 days as to why should you not be expelled from the party."
Asaduddin Owaisi, a prominent Muslim parliamentarian from Telangana's capital Hyderabad, condemned the comments made by the BJP legislator.

"The BJP doesn't want to see that there is peace in Hyderabad. The BJP hates Prophet Muhammad and Muslims. They want to destroy the social fabric of India," he told India's ANI news agency.
"Fight with us politically, we are ready for that but don't spew hatred in the society and instigate communal riots here. Insulting the Prophet and the Muslim community has become the official policy of the BJP."