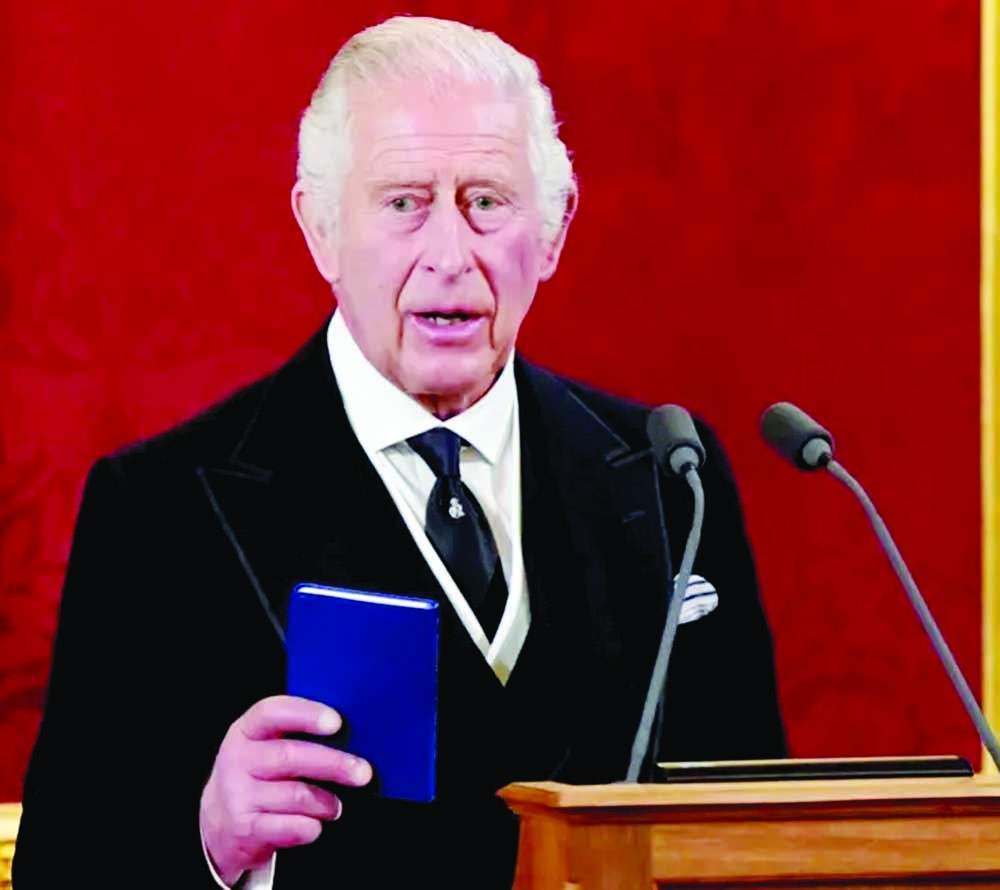 News Desk :
King Charles III was formally proclaimed as Britain's new monarch on Saturday morning, following a rare meeting of the United Kingdom's Accession Council.
At 11 am, David White, the Kingdom's Garter King-at-Arms performed his once-in-a-lifetime ceremonial duty, proclaiming from the balcony of St. James' Palace in London King Charles' accession to the throne.
The proclamation was also read publicly in the other capital cities of the UK - Edinburgh in Scotland, Belfast in Northern Ireland, and Cardiff in Wales - and at other locations.
While King Charles III immediately became the king upon the death of his mother, Queen Elizabeth II, who died Thursday after a record 70 years on the throne, it was the Council's role to formally acknowledge the passing of one monarch and to then proclaim the new one on behalf of the British government. Following the tradition, an Accession Council met to proclaim him as King, with his son and heir William, wife Camilla and Britain's new Prime Minister, Liz Truss, among those to sign the proclamation.
During the formal meeting of the council, six former prime ministers, bishops and a host of politicians shouted "God Save the King".
The principal proclamation was then read aloud by the Garter King-at-Arms from the balcony of St James's Palace to a public crowd gathered below, followed by gun salutes in Hyde Park and the Tower of London.
The crowd sang the national anthem, God Save the King, with its wording reverting to that last sung 70 years ago, and ceremonial troops gave three cheers for the new king.
It is the first Accession Council since 1952, when Queen Elizabeth II was proclaimed, and in a historic first, Saturday's ceremony was televised.
During it, the King signed a declaration and oath before assembled privy counsellors, including the new Queen Consort and Prince of Wales, using ink from an ink pot gifted to him by Prince William.
In his declaration the King said it was his "sorrowful duty to announce the death of my beloved mother, the Queen". Her reign was "unequalled in its duration, its dedication and its devotion," he said, as the Queen Consort stood nearby looking emotional.
He added: "I am deeply aware of this great inheritance and of the duties and heavy responsibilities of sovereignty which have now passed to me. In taking up these responsibilities, I shall strive to follow the inspiring example I have been set in upholding constitutional government and to seek the peace, harmony and prosperity of the peoples of these islands and of the Commonwealth realms and territories throughout the world.
"In this purpose, I know that I shall be upheld by the affection and loyalty of the peoples whose sovereign I have been called upon to be, and that in the discharge of these duties I will be guided by the counsel of their elected parliaments.
He added: "And in carrying out the heavy task that has been laid upon me, and to which I now dedicate what remains to me of my life, I pray for the guidance and help of almighty God."
Following tradition, the King was missing from the first part of the proceedings, attended only by privy counsellors, and did not witness senior figures from national life including the Queen Consort, the Prince of Wales and the prime minister, Liz Truss, as the proclamation was first read.
During this part, the lord president of the council, Penny Mordaunt, informed the 200 invited privy counsellors of Queen Elizabeth II's death. A platform party, including the Queen Consort, William, Truss and the archbishops of Canterbury and York, then "shall wait on the King to inform him the council is assembled", Mordaunt said.
The proclamation was read aloud, then read again outside in public at 11am from the balcony. It was also read aloud at the Royal Exchange in the City of London one hour later at noon.
At The Royal Exchange in the City, the reading aloud of the proclamation was preceded by the pomp and pageantry of a grand ceremonial procession through the economic heart of the nation, reflecting the unique relationship between the monarch and the City of London.
This was the second proclamation. Other proclamations will follow in coming days in Scotland, Wales and Northern Ireland.
Gun salutes of 62 rounds were fired from saluting stations across the UK and elsewhere to mark the proclamation. There were shouts of "long live the King" by spectators at Tower Bridge.
Salutes were fired from Cardiff Castle, Edinburgh Castle, Hillsborough Castle, Gibraltar, Colchester, York, Larkhill near Stonehenge, naval bases in Devonport and Portsmouth and a number of stations at sea.
The monarch approved the day of the Queen's funeral to be a bank holiday in England, Wales, Scotland, and Northern Ireland.
While the date is yet to be confirmed, it's expected to take place on Sept. 19.
Following White's accession proclamation, royal heralds traveled to repeat the proclamation, heading to London's Royal Exchange, to Scotland, Northern Ireland and Wales. Flags flew briefly at full staff Saturday in honor of the new King, before returning to half-staff in mourning of the Queen.