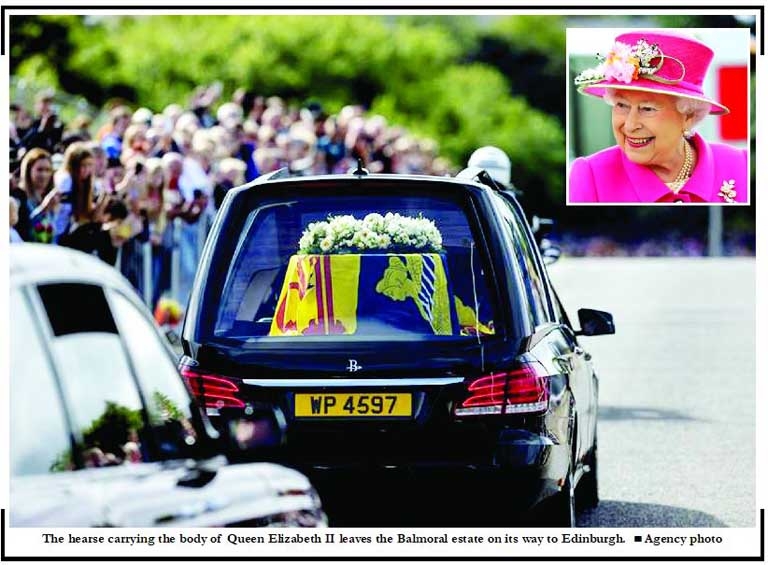 News Desk :
At 10.06am on Sunday morning, Queen Elizabeth II left Balmoral Castle for the last time, starting her final journey to burial at Windsor Castle.
Two armed policemen stood aside to open the gates before a hearse appeared carrying her oak coffin of the late monarch, who had reigned over Britain for a record 70 years.
Draped in the gold, blue and red Royal Standard of Scotland, the black Mercedes turned left for its six-hour journey to the Scottish capital Edinburgh.
It was followed by a Rolls-Royce, carrying her only daughter, Princess Anne, four Range Rovers and a BMW containing armed police.
With the Scottish Highlands framed in the sun-resplendent background, the cavalcade meandered through the conifer forests bordering the A93 that follows the slow bends of the River Dee. For the millions watching the valedictory journey, it was evident why the queen spent so many long summer days in the 20,000 hectares of the Balmoral estate. This is a place, it has been said, where she could "hang her crown on the front gates and kick off her shoes".
This summer, the only interruption was for her last constitutional act in accepting one prime minister's resignation and asking another to form "Her Majesty's Government".
Given her devotion to the UK, her death in Scotland is perhaps fitting in that it binds closer the four nations of Britain in a moment of national unity.
Ballater, a small town often visited by royals in the summer months, was the first to receive the cortege. Nearly all its population of 1,430 lined the main street in total silence as the hearse carrying the late monarch passed, with only a handful of white roses thrown in its path.
The hearse carrying the body of Queen Elizabeth II leaves the Balmoral estate on its way to Edinburgh. EPA
In other rural areas people stood singly or in small groups, bar some farmers, who lined 50 of their tractors on either side of the road in tribute to a woman who loved their land. As the queen's cortege drove to Lowland Scotland, in London her son King Charles III continued his royal duties at Buckingham Palace. He met high commissioners of countries where he is now head of state, including Australia and New Zealand. They are among the 14 realms outside Britain where his role as head of state is largely ceremonial.
As lunchtime passed, the hearse continued its sedate pace, heading down from the highlands to the city of Aberdeen, with the crowds deepening in numbers as the passage went through more populated areas.
By Sunday afternoon, it had crossed Aberdeen's King George VI Bridge, named after the queen's father, on its way to Edinburgh.
Here, the queen will lie in state, with her Scottish subjects able to pay their last respects, until she will be flown to London on Tuesday.
Another hearse will then transport the coffin to Buckingham Palace, before on Wednesday it is taken to Westminster Hall in the Palace of Westminster. The queen's body will lie in state until her funeral on Monday, September 19.
Her final resting place will be in St George's Chapel, Windsor Castle, next to her husband, Prince Philip, Duke of Edinburgh.