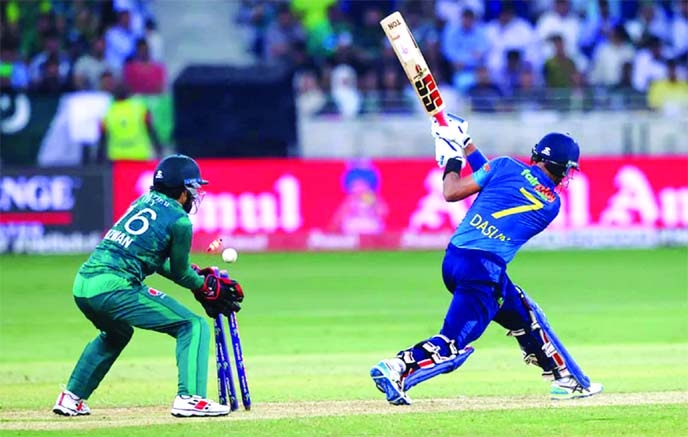 Sri Lanka\'s captain Dasun Shanaka (right) is bowled out by Pakistan\'s Shadab Khan (not in the picture) during the Asia Cup Twenty20 cricket final match against Pakistan at the Dubai International Cricket Stadium on Sunday.

Sports Reporter :
Sri Lanka clinched the T20 Asia Cup defeating Pakistan by 23Â  runs in their final match at Dubai International Cricket Stadium in the United Arab Emirates on Sunday.
Sent into bat first, Sri Lanka piled up a fighting total of 170 for the loss of six wickets in the allotted 20 overs and then bowled out Pakistan for 147 off 20 overs.
Sri Lanka faced a disaster as they lost fiveÂ  wickets for 58 runs.
Then, Bhanuka Rajapaksa and Hasaranga de Silva repaired the damage scoring together 58 runs for the sixth wicket partnership before Hasaranga was caught behind by wicketkeeper Mohammad Rizwan off Haris Rauf when Sri Lanka's score was 116 for the loss of six wickets.
Rajapaksa remained unbeaten with 71 runs. He hit three sixes and six fours in his 45-ball innings.
Hasaranga made 36 from 21 deliveries featuring five fours and a sixer.
After Hasaranga's dismissal, Rajapaksa and Chamika Karunaratne added together 54 runs for the unbroken seventh wicket stand before Sri Lanka's innings came to an end.
Karunaratne remained unbeaten with a run-a-ball 14.
Earlier, one-down Dhananjaya de Silva scored 28 from 21 balls including four fours.
Haris Rauf grabbed three wickets in the space of 29 runs.
Iftikhar Ahmed, Shadab Khan and Naseem Shah took one wicket each for 21, 28 and 40 runs respectively.
Pakistan had a shaky start as they lost their early two wickets for 22 runs.
Sri Lankan bowlers bowled extremely well. Pramod Madushan captured four wickets at the cost of 34 runs, while Hasaranga de Silva grabbed three wickets instead of 27 runs. Chamika Karunaratne picked up two wickets in the space of 33 runs.
Besides, Maheesh Thikshana took one wicket for 25 runs.
Opener Mohammad Rizwan and second-down
Iftikhar Ahmed mended their innings contributing together 71 runs in the third wicket stand before Iftikhar Ahmed was caught by substitute Bandara of Pramod Madushan when Pakistan's score was 93 for the loss of three wickets.
Iftikhar scored 32 from 31 balls with two fours and a sixer.
Third-down Mohammad Nawaz (6) was caught by Madushan off Chamika Karunaratne when Pakistan's total was 102 for the loss of four wickets.
After Nawaz's dismissal, Mohammad Rizwan was caught at the deep midwicket by Danushka Gunathilaka off Hasaranga de Silva when Pakistan's score was 110 for the loss of five wickets.
Rizwan was the most successful batsman of Pakistan. He hit a fine 55. His 49-ball innings was laced with four fours and a sixer.
After Rizwan's dismissal, Pakistani batsmen failed to resist Lankan bowling attack.