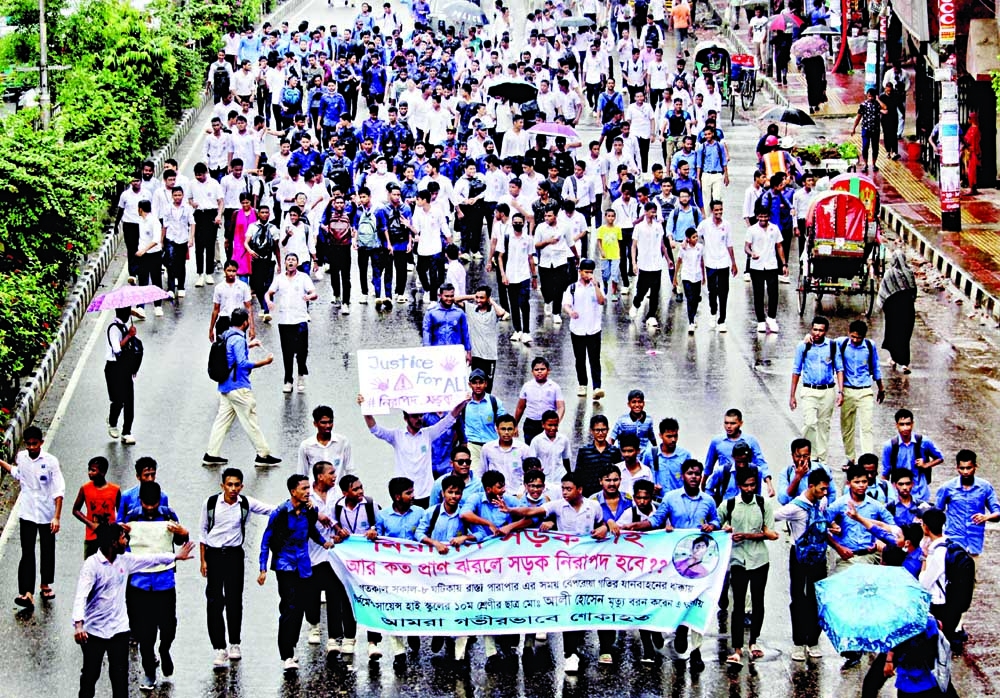 Students bring out a rally at Farmgate intersection in Dhaka on Monday protesting death of their fellow student of Tejgaon Government Science School and College. NN photo

News Desk :
Students of Tejgaon Government Science School and College have poured onto the streets in protest against the death of a schoolboy in a road accident in the capital's on Monday.
The protesters descended in the Farmgate area around 11:45 pm on Monday, with some holding placards saying "Justice for all" and "We want safe roads", reports bdnews24.com
After around 40 minutes, the students led a procession to Bijoy Sarani and continued their demonstration, bringing traffic on all sides of the intersection to a halt.
"They are protesting against the death of a fellow student. As a result, traffic at the Bijoy Sarani intersection ground to a halt. They are being told to leave the streets," said Shaheed Al Masud, Tejgaon Division's deputy commissioner of traffic.
The students demonstrated at Bijoy Sarani for about 20 minutes before marching back to Farmgate.
Sixteen-year-old Ali Hossain died after being run over by a microbes while crossing a road near Tejgaon BG Press on Sunday.
He was a 10th-grader at Tejgaon's Government Science College. Ali was on his way to a private tuition session when he met with the accident, according to the police.
Locals rescued the boy and rushed him to Samorita Hospital. He was subsequently transferred to Dhaka Medical College Hospital, where doctors declared him
dead, said SI Hafizur Rahman of Tejgaon Industrial Area Police Station.
The police seized the microbus that ran over the student and arrested its driver, Ziaul Haque, in Ashulia on Monday, said Hafiz Al Faruk, additional deputy police commissioner of the Tejgaon Division Industrial Area.