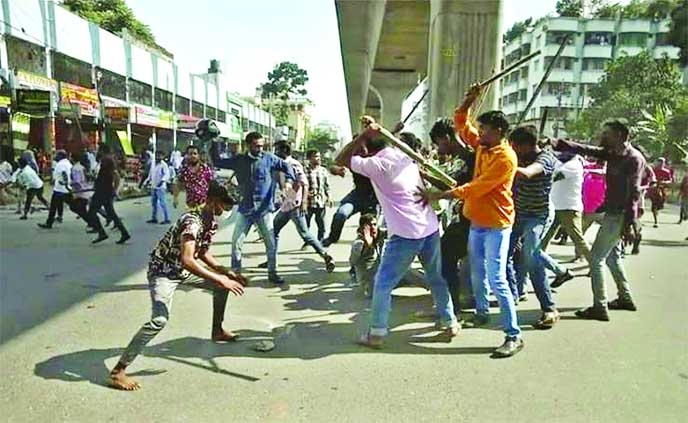 Leaders and activists of BNP and Awami League lock into a clash in the city\'s Mirpur Section-6 on Thursday. NN photo

Staff Reporter :
The opposition political parties especially BNP have been facing confrontations and obstructions from the ruling party workers and the law enforcers whenever they try to hold political programmes to protest the alleged misrule and mismanagement of the government.
A fresh clash erupted between ruling Awami League (AL) and Bangladesh Nationalist Party (BNP) workers in the capital on Thursday when BNP workers organised a rally to protest soaring price hike of essentials, fuels, and killing of their party men. The incident left several people injured.
Meanwhile, on Thursday the European Union in Bangladesh in a tweet raised concerns about escalating protest-related violence.
They also felt the need to "ensure participatory and peaceful conditions as the next parliamentary elections approach."
Thursday's clash erupted between AL and BNP in the capital when AL workers reportedly prevented BNP supporters from attending their scheduled rally in Mukul Fouz field at Mirpur Section 6.
BNP organised the rally to protest the soaring price hike of daily commodities, fuel and killing of their party men during the recent protests in Bhola and Narayanganj.
When the situation went awry, police rushed to the spot and lobbed teargas shells to bring the situation under control at around 3pm.
BNP supporters alleged that AL leaders and activists, by wielding sticks and sharp weapons, chased them when they were going to attend a pre-scheduled rally.
Chhatra League and Jubo League activists have also hurled cocktails during the attack, they alleged.
Iqbal Hossain, former Joint General Secretary of Dhaka City South BNP, said: "Our leaders and workers were going to the Mukul Fouz field to attend our rally. But AL, Jubo League and Chhatra League leaders and workers equipped with rod-sticks and arms swooped on them."
The ruling party activists vandalised their makeshift stage of the rally and took a position on the venue in a bid to foil the programme, he further said.
BNP, on September 10, announced to hold public rallies in 16 spots under its Dhaka south and north city units until September 27 to protest the increase in prices of essentials, fuel and transport fares.
The rallies are also part of their protests against the killings of Bhola Chhatra Dal leader Noor-e-Alam, Swechchasebak Dal leader Abdur Rahim and Narayanganj Jubo Dal leader Shaon Prodhan, and false cases, they said.
Earlier in July, though, the Awami League Party Chief Sheikh Hasina said that she would offer tea to the BNP leaders if they come to seize her office as she believes in democracy.
She also directed the police not to barricade BNP's programme but BNP alleged that the Prime Minister's voice of assurances does not hold ties with the reality.
The BNP top-notch leaders alleged that the government is preventing them from holding their peaceful programme including protest to the soaring price hike, load shedding and sinking economy.
BNP faced serious resistances from the law enforcers during their party's 43rd founding anniversary on September 1, in at least 20 districts, leaving one of its workers killed by police firing in Narayanganj.
BNP, however, vowed that the sacrifice of the blood of their dedicated party workers will not go in vain, rather they would continue their protest until the government topples.