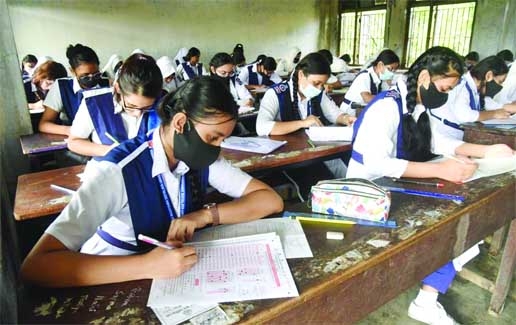 Candidates sit for SSC exams at Azimpur Government Girls\' School and College in the capital on Thursday. NN photo

News Desk :
The Secondary School Certificate (SSC) and equivalent exams kicked off to a smooth start on Thursday.
The exams began at 11am instead of 10am, considering the usual traffic jams in the peak morning hours.
In Dhaka, several exam centres witnessed a large gathering of parents, triggering traffic chaos in the vicinity.
This year, some 20,21,868 students have registered themselves to take the SSC and equivalent exams, 2,21,386 less than that of last year, reports UNB.
Moreover, the exams will be held for two hours instead of the usual three hours this year, and the duration of the MCQ exam is 20 minutes while that of the written exam is 1 hour and 40 minutes.
As per the schedule, the SSC and equivalent examinations will end on October 18.
Some 15,99,711 candidates is expected to sit for the SSC exam under nine general education boards, 2,68,495 for Dakhil exams under Madrasa Education Board and 1,53,662 for vocational exam under the Bangladesh Technical Education Board this year, the Education Minister had earlier said.
Some 3,790 centers have been set up for the SSC exams across the country. The SSC and equivalent examinations under all education boards originally scheduled to begin on June 19 had to be deferred due to the flood situation in the country.
Earlier, it was deferred for about four months because of the pandemic. Usually, the SSC exams take place in February. Coaching centres will remain closed across the country until October 2.Meanwhile, Dhaka Metropolitan Police (DMP) traffic division has requested the examinees in Dhaka to leave their homes early to reach the exam centers on time.
In view of the rain situation in the city, the SSC examinees are requested to start for their respective examination centres as early as possible to avoid traffic congestion, the DMP said in a release on Wednesday.