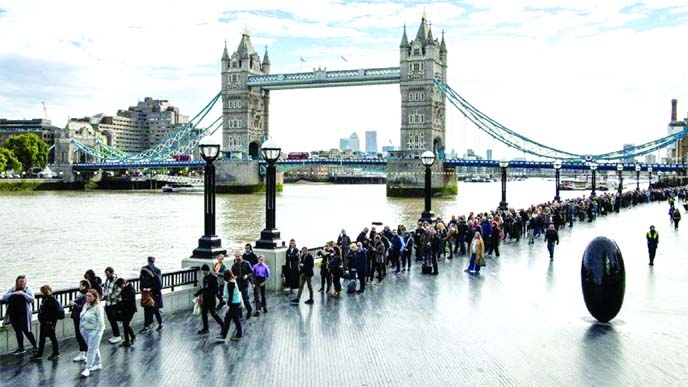 Londoners queue to enter Westminster Hall in order to pay their respect to the late Queen Elizabeth II on Friday.

BBC OnlineÂ  :
The queue to see the Queen lying in state at Westminster Hall is at capacity and has been paused for new joiners, the government has said.
But there was confusion as some people said security staff had let them join the line since entry had been stopped.
The line is now about five miles (8km) long, stretching to Southwark Park in south-east London.
Thousands have paid their respects to the Queen, who is lying in state at Westminster until 06:30 BST on Monday.
After the queue grew overnight, the Department for Culture, Media and Sport said at 09:50 that entry to Southwark Park, where the queue officially ends, would be paused for "at least six hours".
Regular updates on the queue are being published on Twitter, with a live
queue tracker also available on YouTube.
A separate queue for people with accessibility needs is also at capacity, the department said.
At Southwark Park, some of those initially turned away said they had travelled hundreds of miles and were on their second attempts to access the queue.
In a moment of confusion, stewards at the park appeared to allow about 100 people into the park after the pause was announced.
Jane Sebutinde said she was on her way when she heard the queue would be paused. "Currently with my health I can't queue for 14 hours, I thought it would be four hours," she said.
For many of those currently in the main queue, latest estimates suggest they will not enter Westminster Hall until after midnight.
The Met Office advised those in the queue to be prepared for "cool evenings" with overnight temperatures expected to be as low as 8C (46F).
Among those waiting to pay their respects to Her Majesty was former England footballer David Beckham, who was seen queuing in Victoria Tower Gardens.
He told the BBC he had been queuing for about 12 hours, having joined at about 02:00, and had been sharing food with those around him.
"We all want to be here together, we all want to experience something where we celebrate the amazing life of our Queen and I think something like this today is meant to be shared together," he said.
"So the fact we've been here, we're eating Pringles, sherbet lemons, sandwiches, having coffee, donuts as well." When asked how he was managing, the ex-England captain said his knees were okay but "it's the back and the feet" that were feeling the effects of 12 hours of queuing.
One woman who was queuing behind him spoke of her shock at seeing the former Manchester United and Real Madrid star waiting alongside members of the public. "Big respect to him, he's stood with us and he's paid his respects how he wants to and I think that's amazing."
Later, Beckham appeared solemn as he entered Westminster Hall to pay his respects. He had to wait for the changing of the guard to take place before he filed past the Queen's coffin and bowed.
The queue follows the south bank of the River Thames from the Palace of Westminster, through Lambeth, Southwark, and into Bermondsey.
Meanwhile, a row has broken out over who is allowed to skip the queue to pay their respects to the late Queen after it emerged MPs and Lords had special access.
The announcement of the queue's pause came shortly after it was confirmed Queen Elizabeth II's grandchildren would hold a 15-minute vigil at Westminster Hall on Saturday evening.
The Prince of Wales and the Duke of Sussex will observe the vigil alongside six of their cousins. The royal brothers will both wear military attire for the occasion, after a request from their father, King Charles.
The King and his siblings, the Princess Royal, the Duke of York and the Earl of Wessex, will hold a similar vigil on Friday evening. King Charles is in Wales for his first official visit as monarch.
The former Prince of Wales and Camilla, the new Queen Consort, attended a prayer and reflection service for the Queen at Cardiff's Llandaff Cathedral and met members of the public at Cardiff Castle.