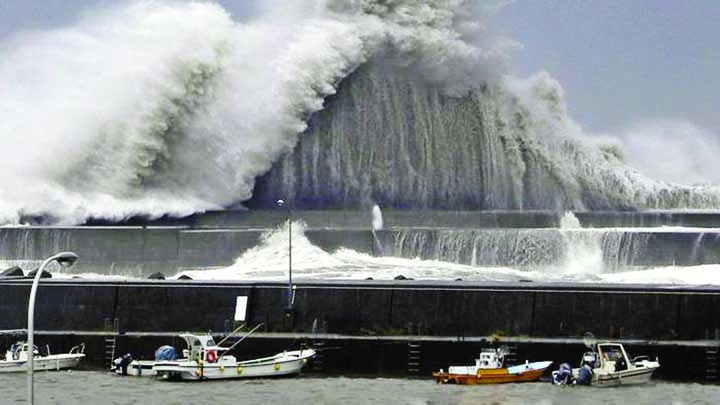 Typhoon Jebi makes landfall on the southwestern island of Shikoku, Japan\'s smallest main island, shortly after Sunday noon before going on to rake across on the western coast of Honshu, the largest island. Agency photo

BBC Online :
One of the biggest typhoons ever to strike Japan has made landfall on the southern island of Kyushu.
Typhoon Nanmadol has brought winds of at least 180 km/h (112mph) and some areas could see 500mm (20 inches) of rainfall over Sunday and Monday.
At least four million people have been told to evacuate their homes.
Extensive flooding and landslides are expected, while bullet train services, ferries, and hundreds of flights have been cancelled.
The typhoon made landfall near the city of Kagoshima, on the southern tip of Kyushu, on Sunday morning.
Kyushu is the southernmost of the four islands that make up the main body of Japan and has a population of more than 13 million people. Authorities had issued a "special alert" for the island, the first ever put in place outside the Okinawa Prefecture, which consists of the smaller, remote Japanese islands in the East China Sea, the Japan Times reports.
Japan's Meteorological Agency said Nanmadol would bring torrential rain, storm surges along the coast, and winds so powerful there was a risk that homes could collapse.
An official in the city of Izumi said conditions on Sunday afternoon were deteriorating rapidly.
"The wind has become extremely strong. Rain is falling hard too," he told AFP. "It's a total white-out outside. Visibility is almost zero."
The typhoon is now moving north across Kyushu, dropping huge amounts of rain on the mountainous centre of the island.
It is expected to travel up through central Japan towards Tokyo over the coming days and to maintain much of its strength as it moves.
The biggest threat to life and property is from the rain, which is already causing rivers to rise and could unleash land and mudslides.
People across Kyushu have been told to seek refuge in shelters, but the evacuation warnings are not mandatory, and authorities have in the past struggled to convince people to move to shelter before extreme weather events.
By Sunday evening, utility companies said almost 200,000 homes across were without power.
In a statement, Prime Minister Fumio Kishida told people to "evacuate without hesitation if they feel in danger in any way".
"I urge [everyone] to avoid going near places posing potential dangers such as rivers and other waterways or places at risk of landslides," he said.
"It is extremely dangerous to evacuate at night. I urge the public to evacuate to a safe location before nightfall."
Nanmadol is the 14th Pacific typhoon this season, and by far the largest to hit Japan.
Speaking on Saturday, an official from Japan's meteorological agency said it had the potential to be worse than both Typhoon Jebi in 2018, which left 14 people dead, and Typhoon Hagibis, which caused widespread power cuts in 2019.
The country is well-prepared for dealing with such storms, but scientists say climate change is making them bigger and more destructive.