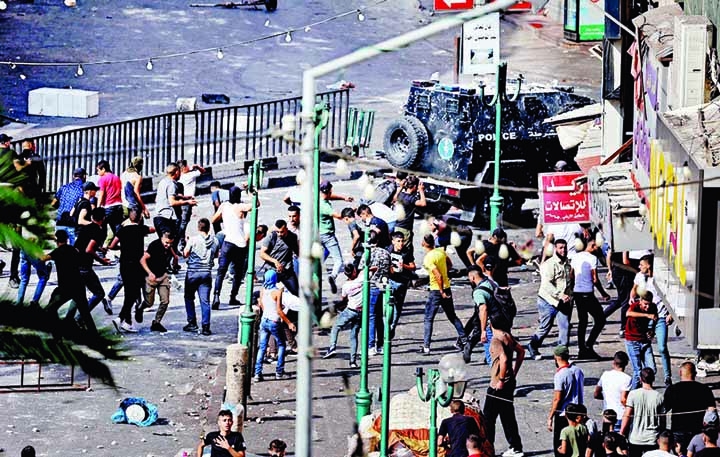 Palestinian protesters clash with Palestinian security forces in Nablus in the occupied West Bank on Tuesday following the arrest of two members of the Islamist group Hamas. Agency photo

AFP :
A rare operation by the Palestinian Authority security forces to arrest a Hamas member sparked clashes in the West Bank city of Nablus on Tuesday, multiple sources said.
There were reports that a bystander, 53-year-old Firas Yaish, was killed in the crossfire but the Palestinian health ministry had not yet confirmed the death. A tweet, purportedly from Yaish's cousin Kawther, said it was "mourning" Firas's death.
Unrest persisted through the morning, with hundreds of youths hurling rocks at PA armoured vehicles and the sound of gunfire ringing out across the city centre, AFP correspondents reported.Â  Â
Hamas, historic rivals of the secular Fatah movement that controls the PA, condemned the arrest of 30-year-old Musaab Shtayyeh, calling it a "kidnapping... a national crime" and a "stain" on the PA's image.
It demanded the immediate release of Shtayyeh and Ameed Tbaileh, who was arrested with him, and blasted the PA for keeping up security coordination with Israel.
"The authority has positioned itself as an exclusive agent of the occupation (Israel) in the face of our Palestinian people," the statement said.
While Palestinian president Mahmud Abbas's forces maintain security ties with Israel, which has occupied the West Bank since 1967, PA raids targeting Hamas members are not common.
Fatah and Hamas have made various reconciliation attempts in recent years but relations remain tense. Hamas has controlled Gaza since 2007, when it ousted PA forces from the coastal enclave in deadly street battles.
The northern West Bank has suffered near daily violence in recent months.
Israel has conducted dozens of night-time raids in the area, particularly in Jenin, pursuing wanted individuals.
Dozens of Palestinians, including fighters, have been killed in the raids that began after a series of deadly attacks against Israeli targets in March. Â
Israel has put mounting pressure on the PA to crack down on alleged militants in the West Bank.
Last week, after two Palestinians and an Israeli soldier were killed in clashes near Jenin, Israeli Prime Minister Yair Lapid said he would "not hesitate to act in any place that the Palestinian Authority does not maintain order".
Earlier this month, Israeli armed forces chief Lieutenant General Aviv Kohavi said the "helplessness of the Palestinian Authority security forces" was providing fertile ground for the armed groups.