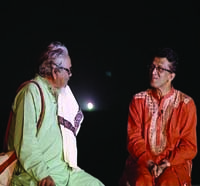 Entertainment Report :
Noted actor and play director Gazi Rakayet will take part in a different type street show titled Raat Biraat-e as the guest of its tonightâs episode, which will be aired at 11:30pm on popular satellite channel Banglavision.
In this episode, Gazi Rakayet will be seen roaming in some of his memorable corners of the city, while he will also enjoy the beauty and tranquillity of the capital.
He will also share some untold stories of his personal life and will also disclose his future career plan.
Hosted by poet Asad Chowdhury, the show was produced by Kawnine Sourav.