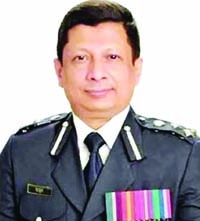 Staff Reporter :
The elite force Rapid Action Battalion (RAB) Director General (DG) Chowdhury Abdullah Al Mamun has been appointed as the next Inspector General of Police (IGP).
Public Security Division of the Ministry of Home Affairs issued a gazette notificationÂ  in this regard on Thursday.
The RAB DG Al Mamun will succeed Dr Benazir Ahmed who is going into retirement on September 30.
According to the notification, the new appointment would be effective from September 30.
Earlier on 15 April 2020, Chowdhury Abdullah Al-Mamun was made the eighth Director General (DG) of RAB replacing Benazir Ahmed.
Chowdhury Abdullah Al Mamun, an official of eighth BCS batch was promoted to grade-1 on October 18, last year. He is scheduled to go on retirement on January 11, the next year.
Born in Sunamganj in 1964, Chowdhury Abdullah Al-Mamun completed his graduation and post graduation in Sociology from Chittagong University.
He joined Bangladesh Police as an assistant superintendent of police in 1989.
He has served as the Superintendent of Police in Nilphamari district, deputy commissioner in Dhaka Metropolitan Police and Deputy Inspector General in Mymensingh and Dhaka Range and Police Headquarters.