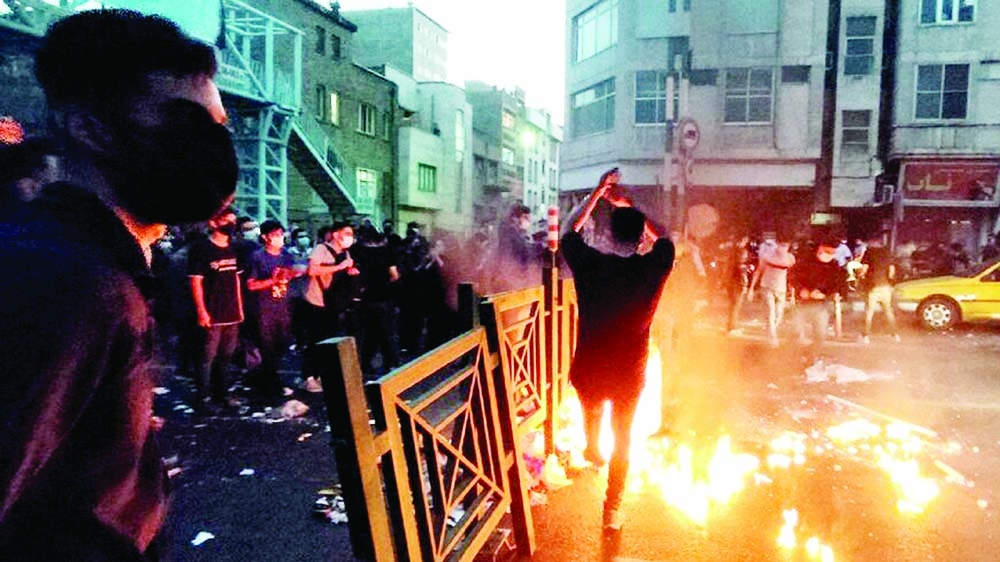 People light a fire during a protest over the death of Mahsa Amini, a woman who died after being arrested by the Islamic republic\'s \"morality police\", in Tehran, Iran, on Thursday. Agency photo

Agencies :
At least 31 civilians have been killed in an Iranian security forces crackdown on protests that erupted over the death in custody of Mahsa Amini after her arrest by the morality police, an Oslo-based NGO said Thursday.
"The people of Iran have come to the streets to achieve their fundamental rights and human dignity... and the government is responding to their peaceful protest with bullets," Iran Human Rights (IHR) director Mahmood Amiry-Moghaddam said in a statement, publishing a toll after six days of protests.
IHR said it had confirmed protests taking place in over 30 cities and other urban centres, raising alarm over "mass arrests" of protesters and civil society activists.
IHR said its toll included the deaths of 11 people killed Wednesday night in the town of Amol in the northern Mazandaran province on the Caspian Sea, and six killed in Babol in the same province, reports news agencies.
Meanwhile, the major northeastern city of Tabriz saw its first death in the protests, IHR said. "Condemnation and expression of concern by the international community are no longer enough," Mr. Amiry-Moghaddam said.
The scope of Iran's ongoing unrest, the worst in several years, still remains unclear as protesters in at least a dozen cities - venting anger over social repression and the country's mounting crises - continue to encounter security and paramilitary forces.
Widespread outages of Instagram and WhatsApp, which protesters use to share information about the government's rolling crackdown on dissent, continued on Thursday. Authorities also appeared to disrupt internet access to the outside world, a tactic that rights activists say the government often employs in times of unrest.
In a country where radio and television stations already are state-controlled and journalists regularly face the threat of arrest, the paramilitary Revolutionary Guard urged the judiciary on Thursday to prosecute "anyone who spreads fake news and rumors" on social media about the unrest.
The demonstrations in Iran began as an emotional outpouring over the death of Mahsa Amini, a young woman held by the country's morality police for allegedly violating its strictly enforced dress code. Her death has sparked sharp condemnation from the United States, the European Union and the United Nations.
The police say she died of a heart attack and was not mistreated, but her family has cast doubt on that account. Independent experts affiliated with the U.N. said Thursday that reports indicated she was severely beaten by the morality police, and called for an impartial investigation to hold perpetrators accountable.
The protests have grown in the last four days into an open challenge to the government, with women removing and burning their state-mandated headscarves in the streets and Iranians setting trash bins ablaze and calling for the downfall of the Islamic Republic itself.
"Death to the dictator!" has been a common cry in the protests.
Demonstrations have rocked university campuses in Tehran and far flung western cities such as Kermanshah. Although widespread, the unrest appears distinct from earlier rounds of nationwide protests triggered by pocketbook issues as Iran's economy staggers under heavy U.S. sanctions.
The unrest that erupted in 2019 over the government's abrupt gasoline price hike mobilized working class masses in small towns. Hundreds were killed as security forces cracked down, according to human rights groups, the deadliest violence since the 1979 Islamic Revolution.
Iran's state-run media this week reported demonstrations of hundreds of people in at least 13 cities, including the capital, Tehran. Videos online show security forces firing tear gas and water canons to disperse the protests. London-based Amnesty International reported that officers also fired birdshot and metal pellets and beat protesters with batons.
Footage on social media from the northern city of Tabriz shows a young man allegedly shot by security forces bleeding out in the street as protesters shouted for help.
At least nine people have died in the confrontations, according to an AP count based on statements from Iran's state-run and semiofficial media. In a statement on Thursday, the Guard blamed the unrest on "Iran's enemies," saying their "sedition will fail."
In Amini's home province in the northwest, Kurdistan, the provincial police chief said four protesters were killed by live fire. In Kermanshah, the prosecutor said two protesters were killed by opposition groups, insisting that the bullets were not fired by Iran's security forces.
Some demonstrators appear to have targeted security forces. Three men affiliated with the Basij, a volunteer force under the Guard, were killed in clashes in the cities of Shiraz, Tabriz and Mashhad, semiofficial media reported, bringing the death toll acknowledged by officials to at least nine on both sides.
In Mashhad, the state-run IRNA agency reported that a policeman was hospitalized with severe burns after protesters tried to set him on fire.
The independent experts with the U.N. said the clashes have killed at least eight people by their count, including a woman and 16-year-old boy, with dozens more injured and arrested.
The clashes have left a trail of destruction. In the province of Mazandaran, along the coast of the Caspian Sea, angry crowds damaged or set fire to over 40 government properties and injured 76 security officers, Rouhollah Solgi, the deputy governor, said Thursday.
As the protests spread, authorities shut down the internet in parts of the country, according to NetBlocks, a London-based group that monitors internet access, describing the restrictions as the most severe since the mass protests of November 2019.
Iran has grappled with waves of protests in the recent past, mainly over a long-running economic crisis exacerbated by Western sanctions linked to its nuclear program. Iranians also blame government corruption and mismanagement as prices of basic goods soar, the currency shrivels in value and unemployment remains high.