US aircraft carrier arrives in South Korea to âdeterâ Pyongyang 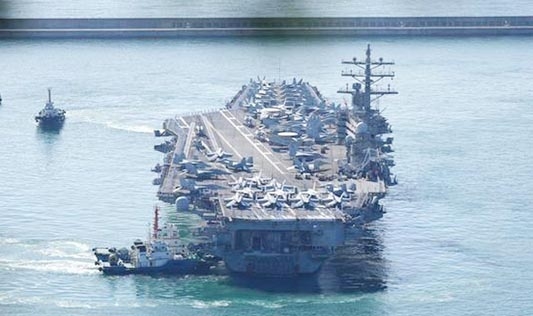 BSS :
A US aircraft carrier arrived in South Korea on Friday for the first time in nearly five years, ahead of joint drills in a show of force aimed at the nuclear-armed North.
The nuclear-powered USS Ronald Reagan and vessels from its strike group docked in the southern port city of Busan, part of a push by Seoul and Washington to have more US strategic assets operating in the region.
South Korea's hawkish President Yoon Suk-yeol, who took office in May, has vowed to beef up joint military exercises with the United States, after years of failed diplomacy with North Korea under his predecessor.
"The deployment of the carrier USS Ronald Reagan to Busan demonstrates the strength of the South Korea-US alliance," a South Korean defence ministry official told AFP. The visit aims to "deter North Korea's nuclear and missile threats", the official added.
Pyongyang has conducted a record-breaking blitz of weapons tests this year, and earlier this month revised its nuclear law, enshrining a "first strike" doctrine and vowing never to give up its nukes.
The US Navy said the USS Ronald Reagan is accompanied on the South Korea visit by two vessels from its strike group -- the USS Chancellorsville, a guided-missile cruiser, and the USS Barry, a guided missile destroyer.
They will take part in joint drills of South Korea's east coast this month, the Yonhap news agency said, adding that the nuclear-powered submarine USS Annapolis is also expected to participate.
The carrier's visit comes after months of warnings from South Korean and US officials that North Korean leader Kim Jong Un is preparing to conduct another nuclear test.
The isolated regime has tested nuclear weapons six times since 2006. Its last and most powerful one in 2017 -- which Pyongyang claimed was a hydrogen bomb Washington is Seoul's key security ally and stations about 28,500 troops in South Korea to protect it from the North.
The two countries have long carried out joint exercises, which they insist are purely defensive but North Korea sees them as rehearsals for an invasion.
Last month, the United States and South Korea staged their biggest combined military drills since 2018 -- the resumption of large-scale training sessions that had been scaled back due to Covid-19 and the bout of failed diplomacy with Pyongyang.