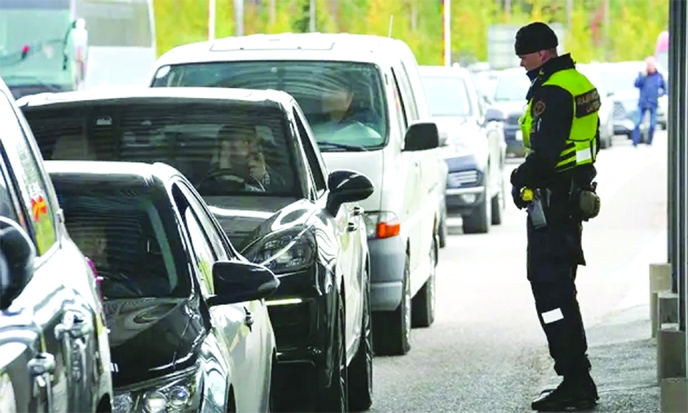 A Finnish border guard stands near cars queuing in Vaalimaa, Finland, to enter the country from Russia on Friday.

The Guardian :
Long lines of vehicles continue to form at Russia's border crossings on the second day full day of Vladimir Putin's military mobilisation, with some men waiting over 24 hours as western leaders disagree over whether Europe should welcome those fleeing the call-up to fight in Ukraine.
The Russian president's decision to announce the first mobilisation since the second world war has led to a rush among men of military age to leave the country, likely sparking a new, possibly unprecedented brain drain in the coming days and weeks.
Witnesses on the border with Georgia, a popular route used by Russians to leave the country, said that some men resorted to using bicycles and scooters to skip the miles-long queue of traffic jams.
Footage from the scene circulating on social media appears to confirm these reports.
"I have been waiting in my car since Thursday afternoon," said Anton, who declined to give his surname fearing it might complicate his travel. "Everyone is worried that the border will be closed by the time we get anywhere close to it," he added.
Usually sleepy border crossings into Kazakhstan and Mongolia have also been overwhelmed by the sudden influx of Russians looking for a way out.
Russian international borders remain open for now, but there are widespread fears Putin will impose martial law next week in an effort to prevent a further outflow of men from leaving the country.
Countless social media groups have popped up offering advice on how to flee Russia while independent news sites operating from outside the country give a list of "where to run away right now from Russia".
Meanwhile, there were calls in the west to

reverse some of its travel restrictions imposed on Russia following the country's invasion on 23 February.
"It may be the moment to rethink the issue of visas to Russians â¦ Helping the men who want to flee from being mobilised would be a humanitarian and military good decision," tweeted GÃ©rard Araud, a veteran French diplomat and former ambassador to the US.
Germany on Friday opened the door to the possibility of allowing Russian deserters to enter its country, saying that it welcomed reports that "many" Russians did not want to fight in Ukraine
Â "Many Russians who are now being called up do not want to take part in this war either. This is a good sign," a government spokesperson told journalists at a news conference.
Â "A way must be left open for Russians to come to Europe and also to Germany," they added.
But the three Baltic countries and Poland, nations that earlier this week closed their borders to most Russians, have so far pushed back against offering refuge to fleeing Russians.
The Lithuanian defence minister, Arvydas AnuÅ¡auskas, on Thursday said "being drafted into the army is not enough" of a reason for Russians to get asylum in his country, which borders the Russian exclave of Kaliningrad.
"A refusal to fulfil one's civic duty in Russia or a desire to do so does not constitute sufficient grounds for being granted asylum in another country", the Estonian foreign minister, Urmas Reinsalu, told Reuters.
Finland, the last EU country that still allows entry to Russians with tourist visas, said it was considering introducing new laws to reduce the number of Russians entering the country.
"The fear is that we end up being the only border country through which it's possible to travel from Russia to Europe with a Schengen visa granted by another country," Finland's foreign minister, Pekka Haavisto, told local media on Wednesday.
Those that have made it across the country say that despite all the trouble, they were glad to be out of reach of the Russian military recruitment centres that have already drafted hundreds of men.
Oleg, who on Thursday told the Guardian about his plans to flee the country by driving from the southern city of Orenburg to Kazakhstan, said he spent more than seven hours at the border before eventually making it out of Russia.
"At some point, I was getting desperate," he said. "But it was definitely worth the wait."
Western officials believe Russia "will face major challenges" to mobilise the 300,000 new conscripts claimed by the defence minister, Sergei Shoigu, to its armed forces and that the country's military will struggle to train and equip any new recruits unless the Kremlin waits several months before deploying them on the frontline in Ukraine.
The intelligence experts acknowledged that Moscow's true recruitment target could be higher, but although some reports have suggested the Kremlin's real goal is to mobilise 1 million people, the officials reiterated in a briefing on Friday that it was their belief it will be very hard for Russia to reach 300,000, never mind any larger figure.
When pressed, one official, speaking on condition of anonymity, said that 300,000 was "an immense number of people to then try to get in any sense of semblance to be able to fight in Ukraine". They added: "The authorities will face major challenges even in mustering this number of personnel."
Russia has faced problems with training and equipment throughout the conflict so far, and the officials said that would almost certainly extend to newly pressed recruits. "We think that they will be very challenged in training, let alone equipping such a large force quickly," the official said. Recruits will likely be issued "old stuff and unreliable equipment", they said.
Western officials believe there was a clear regional bias in Russian recruitment, focusing on poor and minority areas in the country's east - and avoiding the country's middle-class urban centres. "We are not as yet seeing at the moment recruiting teams in St Petersburg or Moscow," an official said.
Western officials are not keen to engage particularly with Putin's recent nuclear threats Putin, but they did say they believed that it was not necessarily the case that any Ukrainian territory annexed in the coming days and weeks through so-called referendums would be deemed as covered by Moscow's nuclear umbrella.
"Russian red lines are not necessarily where they say they are," the official said, and that "there are parts of the territory that Russia now controls which are of greater strategic significance to Moscow than others". Although the locations were not spelled out, the Kremlin has long placed a high value on Crimea as well as the parts of Donetsk and Luhansk provinces occupied since 2014.