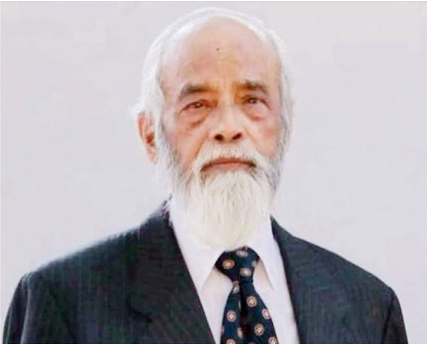 Press releae :
Eminent Nuclear Scientist Professor Dr. Jasim Uddin Ahmed died while undergoing treatment at Bangkok Hospital in Thailand on Thursday. He was 91.
He is survived by his wife, Sakina Ahmed, three sons, Shabbir, Shakil, and Sajjad, and eight grandchildren.
Dr. Jasim Uddin Ahmed was recognised for his influential role in the Language Movement of 1952. He was awarded the Ekushey Padak in 2016.
Dr. Zafrullah Chowdhury, Trustee and founder of Gonoshasthaya Kendro, expressed deep grief and sorrow at his death. He also expressed deep condolence to the deceased Nuclear Scientist's family members and relatives.
Dr. Jasim Uddin obtained Bachelors and Masters degrees in physics from the University of Dhaka. Later, he completed another Masters degree at the University of Rochester and a PhD in nuclear physics at the University of Michigan, Ann Arbor.
He was a director of radiation protection at the International Atomic Energy Agency in Vienna, Austria. He wrote 17 scientific books and travelled the world as a technical adviser to 44 of the IAEA member states.
He wrote and published 36 critically acclaimed books of poetry and released albums of songs. He established a foundation to help and educate poor people. He also opened and ran an orphanage, a school, and a mosque at his village in Cumilla.