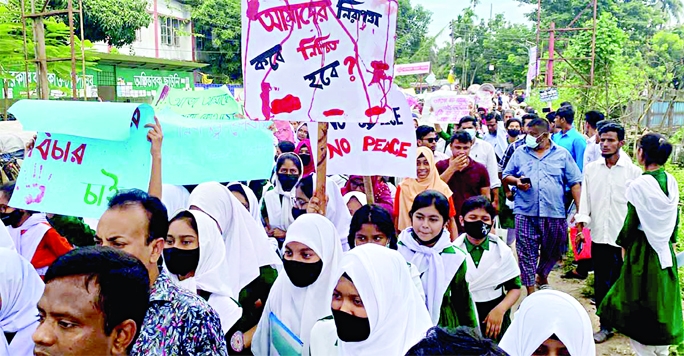 Syed Shemul Parvez :
Violence against women and children, specially the incidents of rape, gang-rape and murder, witnessed an alarming rise across the country in the first nine months of the current calendar year. The incidents of child gang-rape have also marked an alarming rise in the recent times.
According to sources, school going children fall victims to rape, gang-rape or murder one after another, but the members of the law enforcement agencies are reportedly being unable to check the crimes despite having tough laws.
Experts think the rate of child abuse will decline, if exemplary punishment is meted out to perpetrators.
In this regards, the experts blamed the absence of justice, culture of impunity, pornography, social and political unrest, drug addiction, degradation of social values and lack of awareness for the sharp rise in violence against children.
At least 401 women, including 145 children, were victims of rape and 19 victims were killed after rape in the first five months (January-May) of the year, according to the statistics of the Ain o Salish Kendra (ASK), a national legal aid and human rights organisation.
The most recent incident which shocked the nation that an eighth grader was killed after rape at her residence in Noakhali last Thursday (22 September).
Three persons including a house tutor have been arrested in connection with the murder of the school girl Tasnia Hossain Adita on Friday.
After the rape and murder of Adita (14), her classmates and villagers erupted in protest at her home town Noakhali on Saturday.
In the protest rally, a classmate named Nusrat Faria said, we want the execution of the killer of our classmate Adita. We will not leave the streets until her killer is brought to justice.
Earlier on Tuesday, another schoolgirl (16) was gang-raped while outing with a friend in Khulna. She is in ninth grade in a local school. After receiving the complaint, the police arrested three accused involved in the incident.
When asked about the reasons of growing rape incidents in the country, Khandaker Al Moin, Director of Legal and Media Wing of RAB, told The New Nation that RAB is always active to arrest the culprits after the incidents. Even the rate of arrest has increased within short time.Â  Â
Khandaker Farjana Rahman, Professor of Criminology, University of Dhaka, told the New Nation that actually a huge change has been noticed in each and every sector of the state infrastructures recently. The pattern of social organization also changed massively. But the education system of the country has not changed yet.
Lack of proper sex education, most of the girl child are not enough aware about their bodies and minds. Sex education doesn't mean that how to sex? Rather it is very necessary for the child how to protect them.
Besides, after the incident, the victims are not getting proper assistance from the family and society. Sometimes, a victim's family is not filing complaint as the culprits are influential persons, she said.
Unemployment, impact of technology, culture of impunity and absence of enough cultural activities are a few common causes of the rise in child abuse, she added.
Dr. Hafiz Uddin Buiyan, Professor of University of Dhaka, told the New Nation that the incidents of child rape are increasing as the offenders are not getting punishment due to huge backlog of cases and it encourages them to commit crimes again.
He laid emphasis on ensuring quick and exemplary punishment to the culprits and creating awareness to reduce violence against children.
He also urged the political and social organisations to come forward to prevent violence against children and women.
Mentionable that a total of 272 women and girls faced violence in the first month of this year, said a report prepared by Bangladesh Mahila Parishad.
Of them, 70 females, including 39 girls were raped, according to the media monitoring report of Bangladesh Mahila Parishad (BMP).
However, some national studies show that up to 70 percent of women have experienced physical and/or sexual violence from an intimate partner in their lifetime, according to data of the United Nations.
Less than 40% of women who experience sexual violence seek help and less than 10% seek assistance from law enforcement, according to data available on rape in most of the countries.