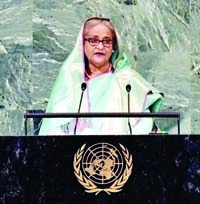 UNB :
Prime Minister Sheikh Hasina on Friday demanded an immediate end to Ukraine-Russia war and resulting sanctions for the sake of lives and livelihoods of the people throughout the world.
"We want the end of Russia-Ukraine war. Due to sanctions, and counter-sanctions, not a single country, rather the entire mankind including women and children is punished," she said.
The Prime Minister made the call while delivering her speech in the 77th session of the United Nations General Assembly (UNGA).
Like the previous years, she spoke in Bangla. The theme of this year's general debate is "A watershed moment: transformative solutions to interlocking challenges".
She mentioned that the impact of Russia-Ukraine war does not remain confined to one country, rather puts the lives and livelihoods of the people of all nations in greater risk, and infringes their human rights. People are deprived of food, shelter, healthcare and education.
She said Children suffer the most in particular and their future sinks into darkness. "My urge to the conscience of the world community- stop the arms race, war and sanctions. Ensure food and security of the children. Establish peace," she said.
She wanted to see a peaceful world with enhanced cooperation and solidarity, shared prosperity and collective actions. "We share one planet, and we owe it to our future generations to leave it in a better shape," she said.
She noted that all believe that antagonism like war or economic sanctions, counter-sanctions can never bring good to any nation. "Dialogue is the best way to resolve crises and disputes," she added.
In this context, she thanked the UN Secretary General for setting up the Global Crisis Response Group.
"As a champion of this group, I am working with other world leaders to determine a global solution commensurate with the gravity and depth of the current situation," said the Bangladesh premier.
"My earnest appeal to you -- stop war, stop arms race. May the values of humanity be upheld. Let us join our hands together and build a better future leaving no one behind," said Sheikh Hasina.
As a result of the Ukraine-Russia war, economic sanctions and counter-sanctions, there has been a supply chain disruption and exorbitant price hike fuel, food and consumer goods, she said.
"This has brought the economy like ours under tremendous pressure. Inflation has been increased. We (Bangladesh) are taking various initiatives to overcome this situation," she noted.