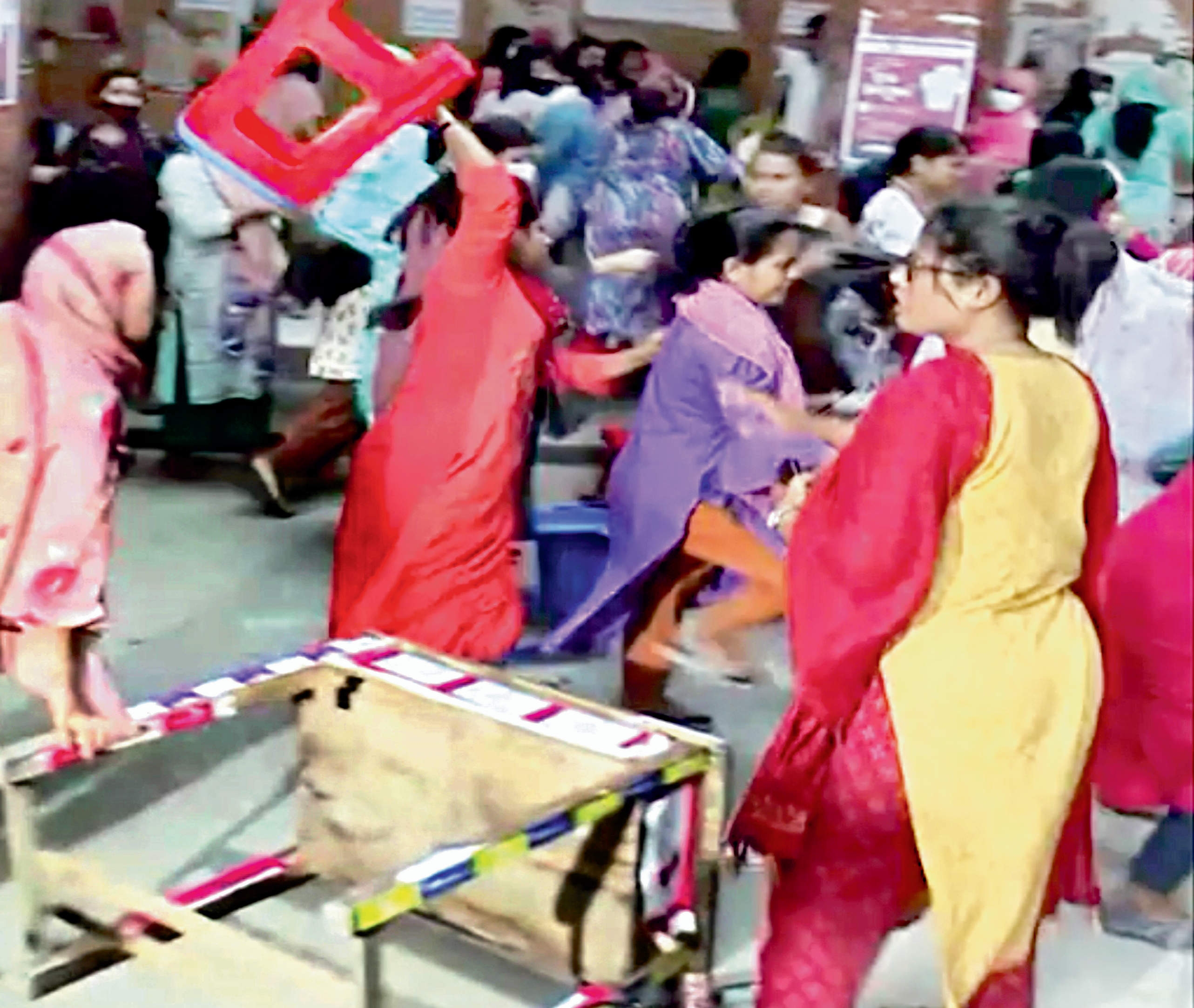 Leaders and activists of Eden Mohila College unit of Bangladesh Chhatra League (BCL) lock into a clash on college premises in the capital on Sunday. NN photo

DU CorrespondentÂ  :
At least 15 people including the Bangladesh Chhatra League (BCL) Eden College unit president were injured after its two factions locked into a clash on the campus.
The incident took place around 5pm on Sunday, while the unit's President Jasmine Riva and General Secretary Rajia Sultana were addressing a press conference at the college auditorium.
Confirming the news, MM Morshed, officer-in-charge of Lalbag Police Station, said a police team is working on the spot and the situation has been brought under control.
Vice-President Sushmita Baroi, belonging to another group, was also injured in the clash. They have been taken to Dhaka Medical College and Hospital for treatment.
Riva and Razia have allegedly been involved with seat trading, extortion and student torture.
Despite the allegations, the college administration and BCL did not take any action against them.
BCL has long been doing business of arranging seats of the college dormitories for the first year students. "We have to pay one time charge Tk 10,000 to Tk 30,000 for each of seat," an Eden College student told The New Nation yesterday, seeking anonymously.
Moreover, 25 BCL leaders, out of 44-member BCL committee of the Eden College, have declared Riva and Razia unwanted. They have threatened to resign if organisational action is not taken against Riva and Razia.
Â The 25 leaders announced at a press conference on Sunday after the alleged attack of Vice-President Jannatul Ferdousi by the followers of Riva and Razia around 10:30 pm on Saturday. "The college administration did not sign any student document without the permission of Riva and Razia," they said at the conference.
College Principal Supriya Bhattacharya could not be reached for comments in this regard.
UNB adds: Jannatul Ferdous, vice-president of Eden Mohila College unit of Bangladesh Chhatra League(BCL), has been injured in an attack allegedly by the followers of its president and general secretary.
Eden College Chhatra League President Tamanna Jasmine Riva and General Secretary Razia Sultana beat up Jannatul Ferdous at Begum Razia dormitory of the college for giving an interview to the media about extortion and seat trading in the college, said students.
A tense situation has been prevailing on the campus over the incident and protest rallies and counter rallies were held after the incident.
On September 22, Jannatul Ferdous gave an interview to the media alleging various irregularities, extortion, seat trading and hall occupation by BCL president and general secretary.
Two days after the interview, the followers of BCL president and general secretary threatened to remove her from the hall around 11 pm on Saturday .
Contacted, Jannatul Ferdous said, "I was outside the hall. Razia's followers entered my room to create trouble. Later, my roommates called me and I returned to hall and talked to some girls. As soon as I came to the hall, followers of Razia beat me up and snatched my phone."
Tamanna Jesmin Riva and Razjia Sultana didn't respond to the call of the UNB correspondent.
However, BCL has formed a two-member probe committee to investigate the incident.