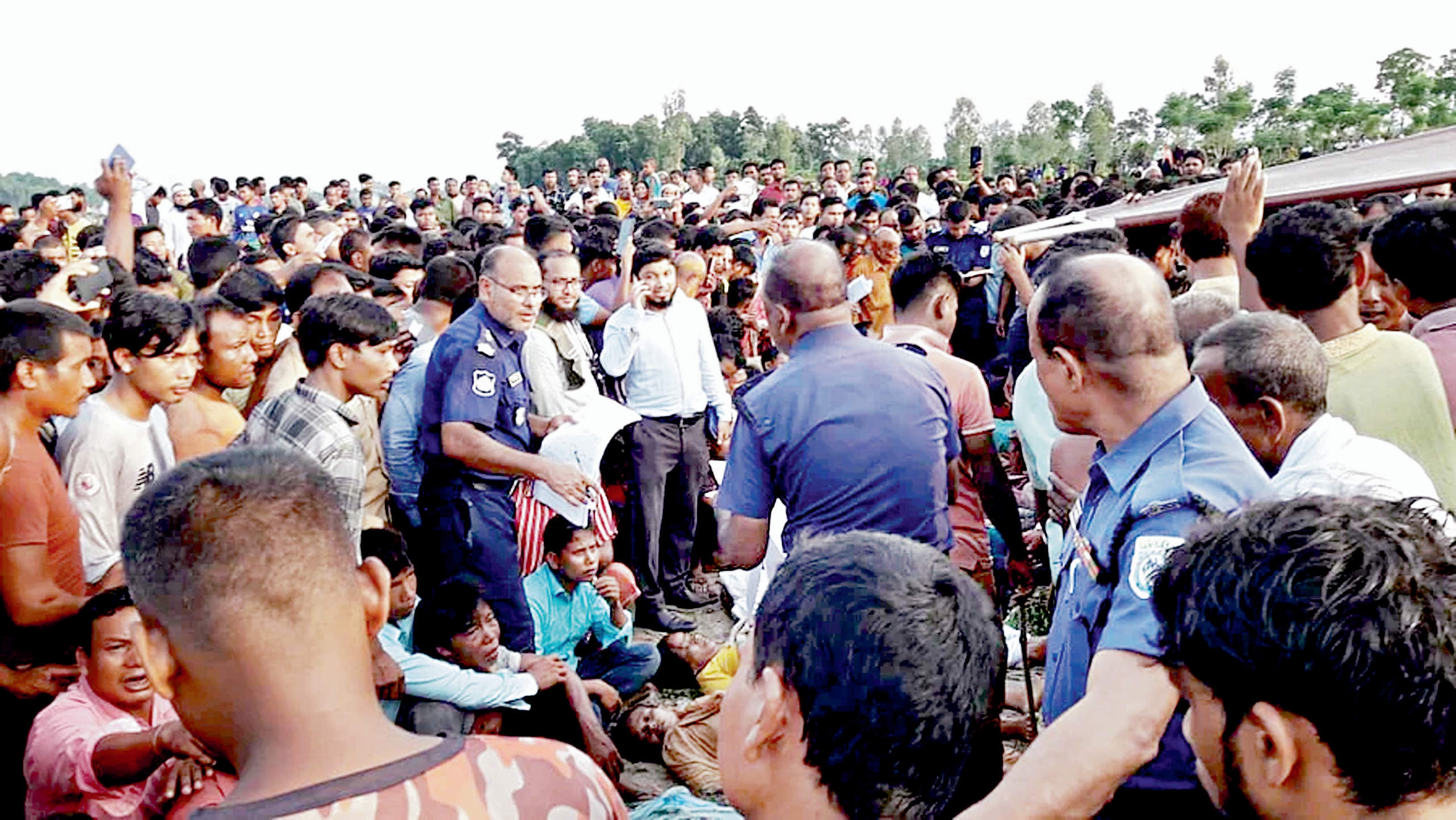 People gather on the bank of Karatoa River at Awliar ghat under Boda upazila in Panchagarh on Sunday afternoon as police count bodies of the deceased in a tragic boat capsize. Agency photo

Staff ReporterÂ  :
At least 24 Hindu pilgrims died and dozens were missing when an overloaded engine-run boat capsized in the strong current of the Karatoa river in Boda Upazila of Panchagarh district on Sunday. Â
Police and fire-fighters said, the rescue operation is continuing, but they are facing troubles due to the strong current in the river.
Meanwhile, Boda Police Station sources said that they had so far recovered 24 bodies and handed over 16 diseased to the respective family members after their identification.
Of the deceased, eight were children, 12 women and four men, police said.
The rest of the bodies were kept in the Boda Upazila Health Complex for the verification of their identity before handing over to the family members.
Meanwhile, a-five member probe committee headed by additional District Magistrate Othoi Aditya was formed and asked to submit the report within seven working days.
"Around 60-70 people were in the engine-run boat bound for the Bodeshwari temple to perform Mahalaya rituals in Boda. But it lost control against the strong current of the Karatoya river and capsized near the Aulia Ghat of Mareya Union of the Upazila," Sujoy Kumar, Officer-in-Charge of Boda Police Station told the New Nation on Sunday.
"Soon after the sinking of the boat, the locals rushed for their rescue. Some 24 people have died so far. The rescue operation is on. The number may increase as many are still missing," he added.
The locals said that the Hindu pilgrims from Boda, Panchpir, Mareya and Benghari areas were heading for the Bodeshwari Temple by an engine-run boat for performing the Mahalaya rituals.
The boat which was carrying overloaded people capsized when it reached the middle of the river, they said. Though some people swam to the bank, most of them were missing, they added.
Soon after the incident, local administration, police and firefighters rushed to the spot to rescue the missing persons.
The incident created a pall of gloom among the members the Hindu community ahead of their biggest festival Durga Puja.
The local administration said they were trying their best to rescue the missing persons and the divers were continuing their operations.
Â "The divers are working relentlessly to rescue the missing persons. Nothing can be said right now when the operation will end. It depends on the divers," Md Soleman Ali, Upazila Nirbahi Officer of Boda, told the New Nation.
Meanwhile, Panchagarh district administration announced Tk 20,000 for each of the deceased in the accident.
"Initially we have announced Tk 20,000 for each deceased. It may increase," Soleman Ali said.
Generally permission is needed from the Department of Shipping to ply any engine-run boat or trawler, which is above 16 Horsepower.
"The boat which capsized in Karatoya River in the Boda Upazila must be above 16 Horsepower. Now an investigation will be carried out whether the boat had any permission and other fitness," a senior officer of DoS preferring anonymity told the New Nation on Sunday.
Boat capsize is nothing new in the rivers across the country. Hundreds of people die each year in boat and ferry accidents in the country.
At least 26 died in May this year after an overcrowded speed boat collided with a sand-laden bulk carrier and sank on the Padma River.
In August, 2020, at least 17 people died when an overloaded boat sank in Madan Upazila of Netrakona district.
Experts said most of these accidents occurred due to overloading, absence of fitness and lack of safety regulation.