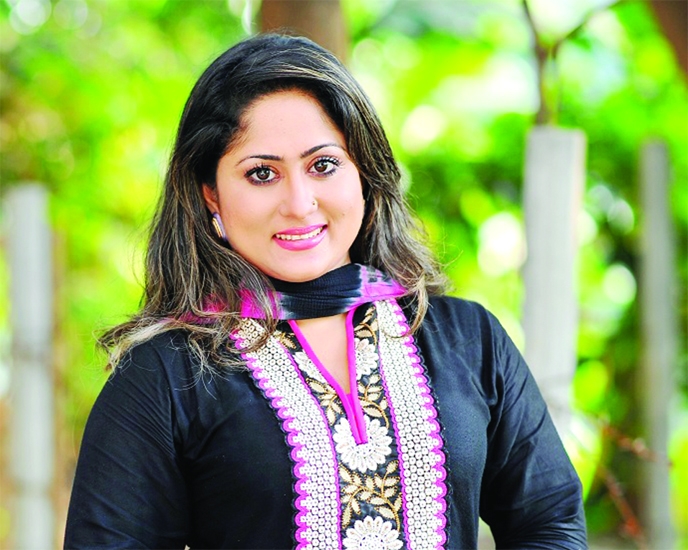 Sheikh Arif Bulbon :
Acting in television dramas, movies and music videos,
Shewly Shila tried to establish her position in media. But in her long term career, Shewly Shila is still not satisfied with
acting, according to the actress. So, she is dreaming to work
in challenging roles of good story based dramas constantly.
In her acting career, Shewly Shila came into media with the hands of noted actress Khaleda Aktar Kolpona. This time
Shila has completed shooting of two dramas, which stories were written by Khaleda Aktar Kolpona. Titles of these
dramas are: âPremik Bikewalaâ and âCall Girl.â Shewly Shila played the central characters in these two dramas.
Whle talking about acting in these two dramas, Shewly Shila told this correspondent, âBasically I have become todayâs Shewly Shila only for respected Khaleda Aktar Kolpona Apa. She inspired me to work in media and showed me the way for acting. Under her direction, I have acted in two dramas which stories are really nice. I hope after airing, viewers will
enjoy these two dramas.â
Though Shewly Shila took a break from acting for some days but now she has become regular in acting. She is concentrating to acting and also giving more time to it. According to Shewly Shila, as acting is her profession, so she has no other plan to do something. Taking acting as her profession, the actress wants to pass rest of her life with it. In fact, she gets fascination about acting and she wants to do good acting for the viewers and her fans. In the meantime, she has already completed shooting of a short film titled âSwapne Dekha Rajkonya,â directed by Rupok. Shila played in the title
role or central character in this short film.
Shewly Shila also said that she has also completed shooting of two documentaries of a ministry. She will be seen to act in some other documentaries which will focus on increasing awareness about child and mother's nutritional foods, creating awareness about increasing allowances of the disabled
persons, and creating attention about orphanages for
destitute and orphan children, etc. Saifuddin and Moniruzzaman are making these documentaries.
Shewly Shila said, âI have been working in media for many days. I have already selected acting as my profession. I didnât learn anything except acting in my life. When I worked
previously I didnât understand anything. Now I am trying to act after understanding the work properly. I am concentrating to the story and also giving focus on my characters.â